I’m still working on learning to bake with 100% whole spelt since I received a lovely Christmas present of a 2 kg bag of Anita’s Organic Whole Spelt from the mill!  So to also learn about about the use of a stiff sweet levain I thought I’d use one in this non enriched dough for the first time.  As you may know having a significant amount of sugar in the starter creates osmotic pressure causing the microbes to dehydrate.  This has a greater negative effect on the LAB than it does on the yeast.  Combine this with a low hydration levain and you have a levain that will favour the yeast because of LAB will be at a disadvantage and this will then reduce the acids that are produced in the levain.  That will then reduce the acid that is transferred to your dough.  Also because the stiff sweet levain has favoured the yeast, the fermentation of your dough will go along quickly without the usual associated rate of pH decline.  This was my thinking in planning this bake.

As you know spelt has poor quality gluten, this is because the balance of gliadin and glutenin show an excess of gliadin to glutenin.  This results in a gluten that is excessively extensible and not very elastic.  With this in mind, in theory a stiff sweet levain should prove to be useful in that less acid will be produced during fermentation.  As you know proteases that break down gluten increase in their activity as the pH of the dough drops.  Protease works well between 3.5-4.5 pH. At a pH of 4, there is maximum protease activity. This activity results in smaller protein chains and loose amino acids. Too much protease activity will destroy the gluten structure you might need right before the dough goes into the oven.

Handful of spelt flakes to finish.

Using a #40 sieve, sift all of the whole spelt flour and VWG.

This resulted in 151 g of bran and course spelt flour, this was scaled with 302 g boiling water and after cooling placed in the fridge overnight,.

In the morning, add the salt and levain to the water breaking the levain down.  Then add all the sifted flour.  After resting 10 mins knead until it forms a firm dough.  After a 10 mins rest, add the bran/spelt scald folding it in and then mix in a stand mixer until good gluten development.

Remove dough for aliquot jar and pH measurements.  pH of dough was 5.44 before adding the scald and then 5.65 after the scald was fully incorporated.  The dough was left to ferment at 82ºC.

After a 30 mins rest the dough was coil folded twice at 30 mins intervals and then left for the remainder of bulk.  The dough had excellent structure and didn’t need more folds.

When the dough reached a 40% rise by aliquot jar the pH had only fallen to 5.24.  This is quite remarkable because typically when using pH to guide fermentation I would see a full 1.0 drop in pH to correlate with a 40% rise by aliquot jar.  This is in keeping with the idea that the stiff sweet levain favoured the yeast and that had as yeast favouring effect in the dough as well.  At this point the dough was given a final shape and after shaping was spritzed with water and rolled in spelt flakes.

The shaped dough, now in a banneton was allowed to complete a warm final proof at 82ºF while the oven was pre-heating to 500ºF until the aliquot jar showed a rise of 60% and a still high pH of 5.1.  While the oven continued to heat the dough was placed in the freezer.  After 30 mins the oven was ready and the dough removed from the oven.  The pH at this point was 4.99.  This is quite remarkable because typically I would see a full 1.3 drop in pH at the time of baking when just following pH and this had a total drop of only 0.67.

Bake with steam at 450ºF for 25 mins.
Vent the oven and remove the steaming equipment.  Normally I would drop the temperature of the oven at this point, but I forgot and left it to bake at 450ºF by accident for another 22 mins.  Typically it would bake at 425ºF for 25 mins or so. 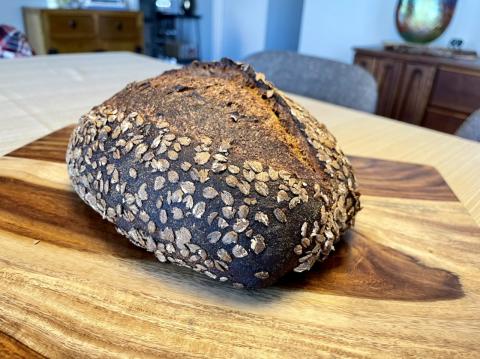 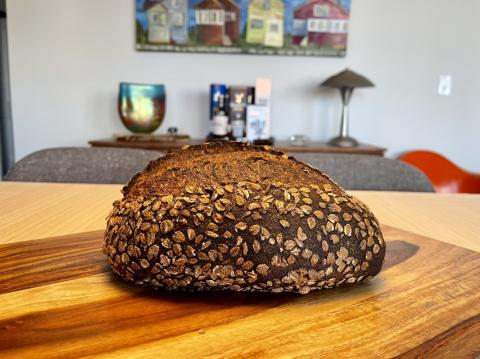 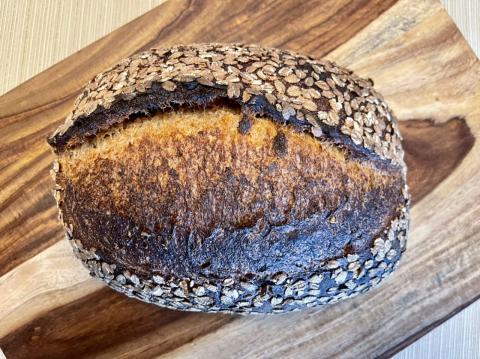 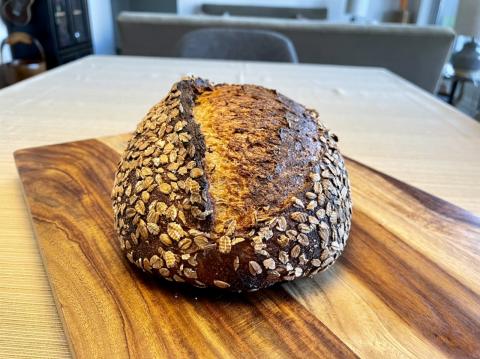 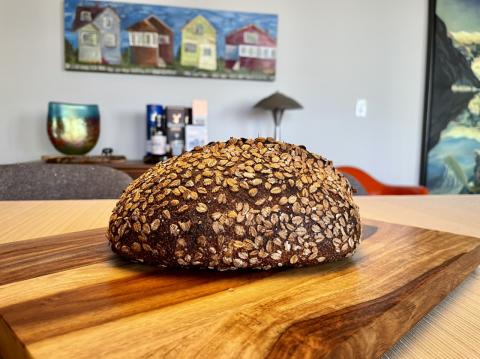 So what do you think?  Did the theories prove to be true?  The post bake oven spring and bloom would suggest it did, the crumb will be the final verdict.