I’ve not made a porridge yet to add to any 100% whole grain bread so thought it was high time to try.  I have a bag of the new Harvest Flakes from Anita’s Organic Mill that they sent me to try out.  You could easily replicate this blend by using organic flaked oats, sesame, flax and sunflower seeds.

In the evening, sift all the stoneground whole wheat flour with a #40 sieve to remove the bran.  Put the bran and Harvest Flake Mix in a small pan and add boiling soaker water and cook until the oats are softened.  The final weight should be 190 g so you may need to add a bit more water than the 99 g if you have great loses from cooking.  However, using boiling water and cooking flaked oats is a quick job so you shouldn’t really have a lot of water loss.  Once cool place in fridge overnight.

Prepare the levain and ferment at 74°F so it is ready in 10 hours.  I find that a levain like this without sugar is at peak to use once the pH drops about 1.3.

In the morning add the sifted water, salt and levain to a bowl and break down the levain.  Then add the sifted flour and mix until no dry flour visible.  Rest for 15 mins to allow the flour to fully hydrate then either knead to moderate gluten development by hand or in a stand mixer.  I used the stand mixer because these porridges especially ones with flax seeds are a gloopy mess to mix into a dough.  Mix until well incorporated.  At this point the pH was 5.52.  So target for shaping is a drop of 1.0 so when the pH of the dough reaches 4.52 I’ll aim to shape and then a further drop of 0.3 for baking.

During bulk fermentation at 82°F I’ll do a bench letter fold followed by coil folds as needed at 30 mins intervals.  For this dough I only did 2 full coil folds and 1 half coil fold.  The pH of 4.54 coincided with an aliquot jar rise of 37% so shaping was done.  I tried a different shaping technique which seems to develop more tension.  If I get proficient at this in the future I’ll do a shaping video.  I rolled the shaping dough in the flake mix on the counter and then transferred the dough to a banneton (no dusting of rice flour needed given the coating of flake mix).  The dough was allowed to proof on the bench until the pH dropped to 4.22.  About 1 hour prior to the estimated time for baking the oven was pre-heated to 500°F and prepared for open steam baking.  So the cast iron skillet was set on the highest shelf so it would pre-heat with the oven.  30 mins later the Sylvia towel in a metal loaf pan was filled with boiling water and placed on the baking steel to pre-steam the oven.  Once the oven was at temperature, the dough was unloaded from the banneton onto parchment, scored and loaded into the oven on the baking steel.  250 mL of boiling water was poured into the cast iron skillet.  The oven temperature was dropped to 450°F and the steam bake was done for 25 minutes.  After 25 mins the steam gear was removed, venting the oven of steam and the temperature dropped to 425°F. The bread completed full baking after another 22.5 minutes. 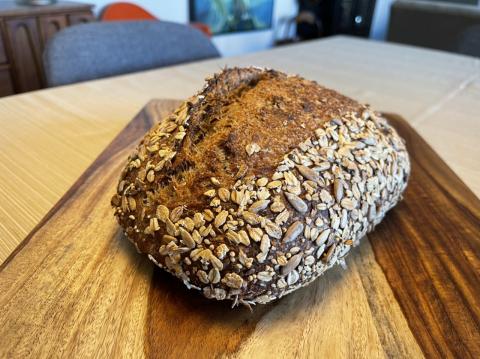 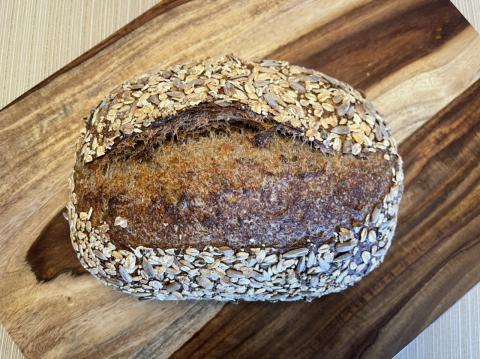 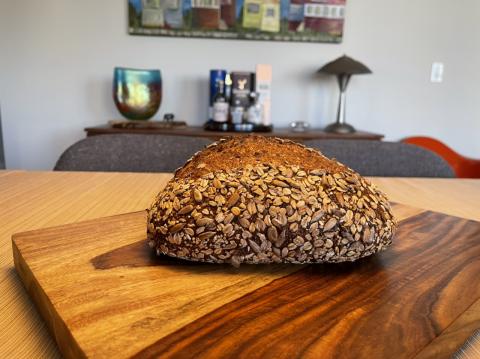 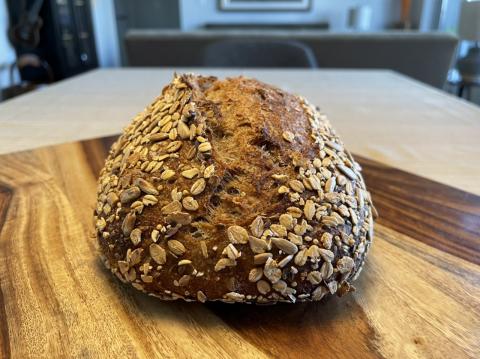 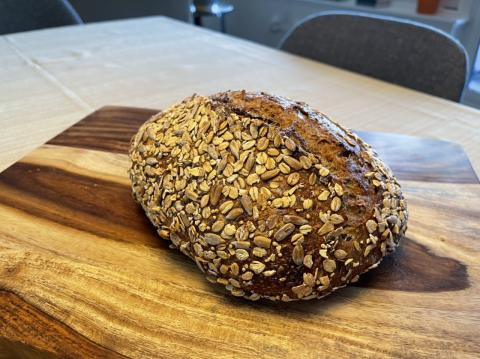