Having always been envious of the incredible loft of the humongous croissants at Pavel’s Backerei in Pacific Grove, California, I challenged myself to see if I could approach Pavel’s great result for post-Turkey breakfast. I made several deviations from textbook croissant dough including buttermilk (instead of milk) , a poolish (instead of pate fermentee) and liquid sourdough levain in my 2.7 kg dough batch. I’ve been kicking the tires on the unexpected(!) steam injection function that came with a newly installed German oven so I baked the croissants with an initial burst of steam. The results were quite good though, in retrospect, I could have proofed for 3 or even 4 hours instead of just 2 1/2 to coax maybe another 1/2 inch of loft from the dough. The new oven’s proof function was a huge improvement over my usual counter proofing which goes much slower since our kitchen tends to run to 65-68 degrees in cool weather.

Half of the dough went into a dozen croissants so I used an average of about 110 g of dough per croissants. I suspect Pavel is possibly getting as much as 150 g into one of his. Will have to ask next time we visit the Monterey peninsula.

With the other half of the dough I made a dozen Kouign-amann, which are constructed of danish dough rolled out in a lot (as in 25% of dough weight!) of sugar for the last lamination fold. The result was quite good, caramelly and a bit sticky, though the dough browned more than I would have liked. Rose Levy Beranbaum uses no milk in her tediously meticulous version which I have followed in the past…apparently to avoid this browning problem. Not wanting to prep multiple doughs, I took the path of least resistance and still came out with a decent product, but I now better understand her caution. I think this dough could have also benefitted from a longer proof than the 45 minutes suggested by RLB, though I’m not sure that the sugar content does not inhibit dough rise. Weill have to test that next time around.

Altogether a fun Thanksgiving distraction. And if you have the good fortune to visit Monterey, don’t miss Pavel’s for great croissants and beautiful artisan breads. 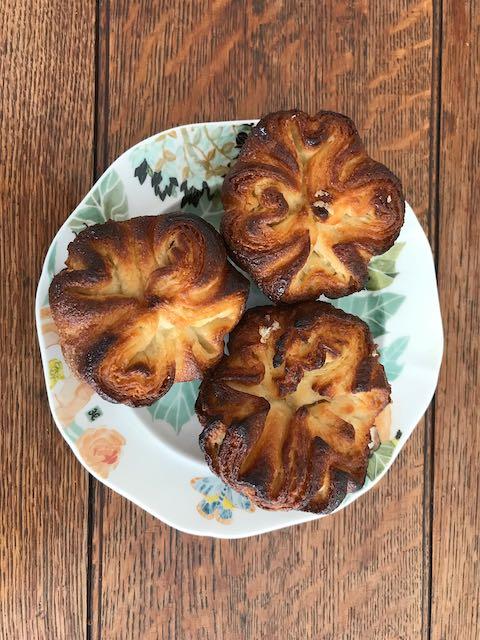