We all seem to not have enough time in our lives lately. And it is worse when it comes to finding time to fit natural fermentation into our days! One thing I’ve been loving about the yeast water bakes is how quickly fermentation takes place. A lot of that speed is due to the sheer amount of levain that is added into the final dough with a large part of the flour coming from the preferment.

So, I’ve also been experimenting lately with high inoculations to see if I can also make sourdough bread in a way that is more convenient for me. I know that there are some bakers (like Peter Reinhart) who have many recipes with a large amount of pre-fermented flour. This bread was made with 48% pre-fermented flour (153% inoculation).

To get this high inoculation I needed a lot of levain. So, I took the approach of emulating what I do with the yeast water – build up the levain in two steps at a hydration of about 63%. When I looked at my starter in the morning it looked like it had gone past its peak, so I added an extra third preferment step at 100% hydration just to commence with a starter at peak. All of this levain building does kind of defeat the purpose of making the bread in a convenient way, but hey this one was another experiment! Preferment #1 had 2 hours in the proofer, then was all used to feed #2 which had 2.5 hours, and the final preferment also had 2.5 hours, so they were all fairly young when they were used. I took care to feed with warmer water – at 36°C (97°F) – and the proofer was set to 27°C (80°F).

The bulk ferment time was a little like the yeast water – 2.5 hours of bulk proofing, followed by 1.5 hours final proof and then immediately baked. The aliquot was at 38% volume increase at the time of shaping and 105% at the end of final proof.

The rustic look was quite lovely (thanks to seam side down in banneton).

This was quite a flavourful bread – the parmesan, olives and especially the origanum (sweet marjoram) bring a lot of flavour, and I might halve the origanum next time. It is also quite difficult to tell if the bread was lacking a sourdough tang because of the strong herb taste.

I’m not completely convinced any more that a 20% innoculation, as is the default in so many recipes, is actually my ideal anymore. Although, my baking notes do testify that high innoculations, like this one, do involve  some work in feeding the preferments. 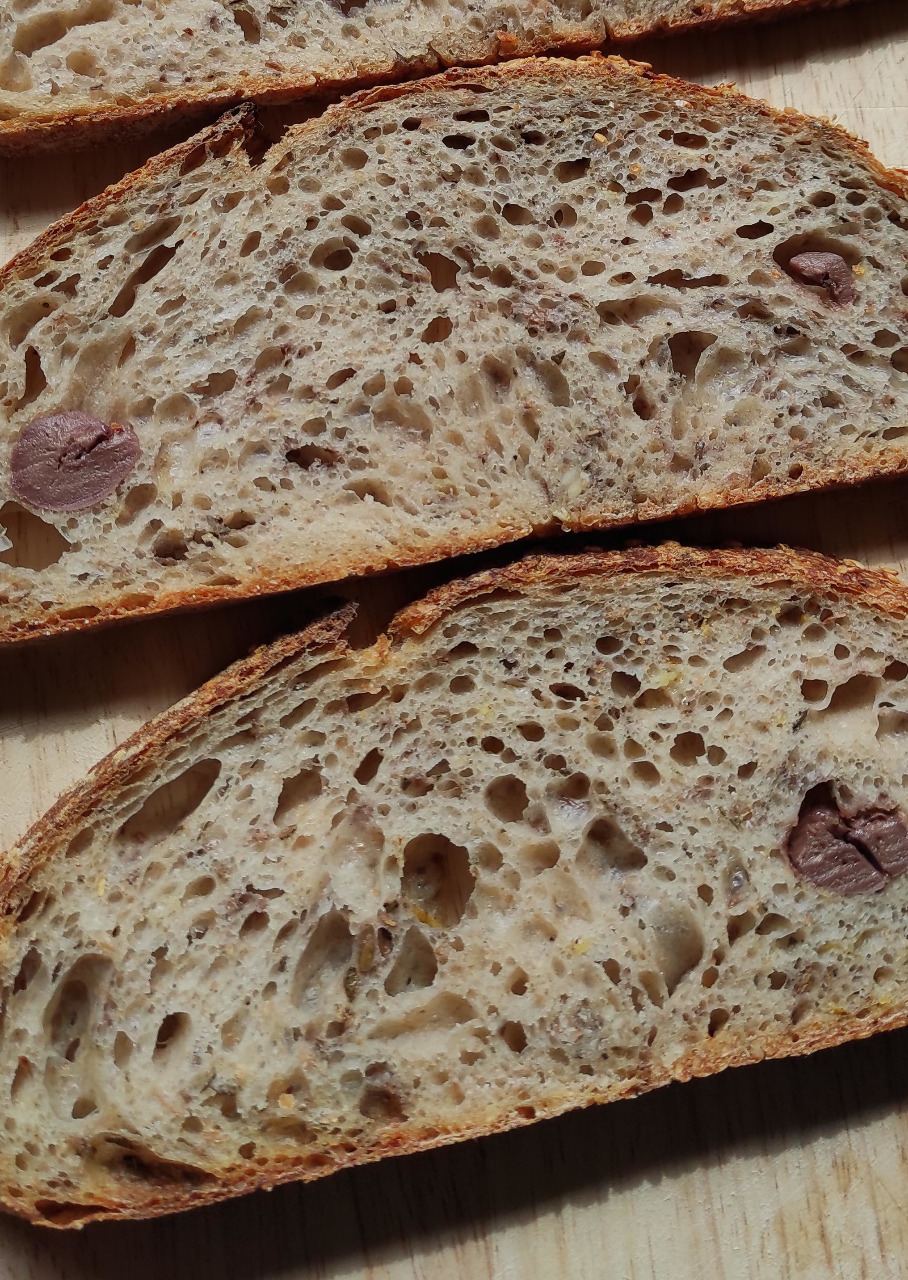