Joshua McFadden says he knew there was good food out there, but it wasn’t at his house

Growing up in Wisconsin, Joshua McFadden says he knew there was good food out there, but it wasn’t at his house. “Oh, my family cooked: big Sunday dinners and holiday parties, with spreads of vegetable salads, mountains of corn with butter and cheese, the grill going all day with burgers, steaks, and sausages,” he writes in the introduction to Six Seasons – a New Way with Vegetables (2017). “Some of my relatives even put up the end-of-the-year produce as pickles and preserves. But in our kitchen, you could still find the box of mac and cheese, processed foods, and out-of-season vegetables and fruits.

“Prowling around my neighbours’ gardens gave me a hint that there was more to food than what was in the cupboards. Some early moments are etched on my palate, maybe even on my soul: Biting into a sun-warmed, plucked-from-the-vine tomato with a salt­shaker in my hand. Pulling a stalk of rhubarb from the ground, blowing off the dirt, and dipping it into a sugar jar. The elemental pleasures of those close-to-the-earth foods have stuck with me.”

“I was adept at working in kitchens, but I also knew that the magic didn’t start in restaurants, it started on the farm. In the orchards. Off the coast. In the mossy soils of the forest. It started with nature,” he writes.

So he worked as a farm manager at a farm in Maine before moving to the American Academy, in Rome, a project started by Alice Waters (of Chez Panisse fame), where he learned to use Italian produce. Today, he is the chef and owner of Ava Genes, in Portland. 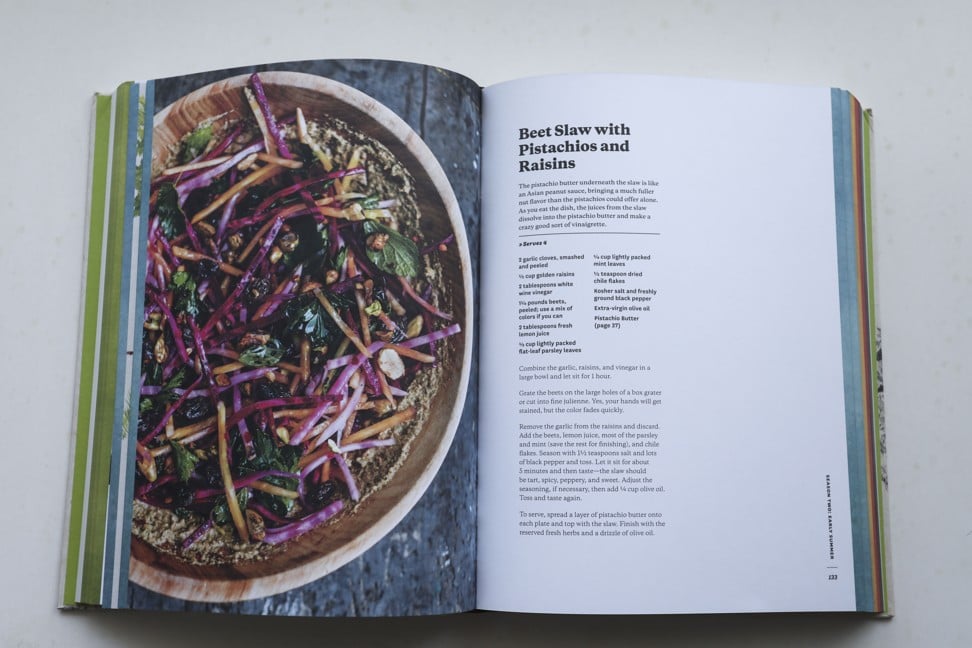 A recipe from the book. Picture: Jonathan Wong

“My goal in writing this book was to encourage and energise cooks at all skill levels – that means you – in your efforts at seasonal and local eating. I want to show you how to eat tomatoes in August, peas in April, butternut squash only when there’s frost on your car windshield. Cherish the vegetables when they’re at their best, and then wait until their season rolls around again. The impact will be profound, in your own kitchen and in the community at large.”

While McFadden’s intentions are admirable, they’re not particularly practical for those of us in Hong Kong, where almost everything is imported. That doesn’t mean we can’t use the recipes, just not as seasonally as he would wish.

The cookbook is vegetable-focused, but not always vegetarian: McFadden uses meat and seafood in several of the dishes. He divides the recipes by season (spring, early summer, midsummer, late summer, fall and winter) then by ingredient. Recipes include leeks with anchovy and soft-boiled eggs; beet slaw with pistachios and raisins; celery and sausage with provolone, olives and pickled peppers; Israeli-spiced tomatoes with yogurt sauce and chickpeas; gratin of Brussels sprouts, gruyere and prosciutto; swiss chard, leek, herb and ricotta crostata; and onion bread soup with sausage.