With the cooler weather I was tempted to experiment a bit with adding some dried fruit and nuts to my basic everyday sourdough loaf (with the addition of some honey).  If it turned out well, I planned on upping the whole wheat percentage on a subsequent bake (next week maybe).

I should have let the hydrated fruit and nuts dry out a tad longer because I think they added some mini ‘steam zones’ within the crumb, resulting in some large holes.  However, instead of pulling moisture from the dough, they adding some to the crumb and I was super pleased with the resulting springy, custard-like texture.  The flavor is great as well.  I initially was going to use just dried apricots and pistachios but decided to add some dried cranberries and hazelnuts too, soaking the lot in some boiling water for a couple hours before adding them (drained) during lamination.

I can’t tell if the dough was slightly over-fermented or if the irregular crumb was due to the increased moisture from the hydrated fruit/nut mixture.  Since this is my first time using such a large ‘add in’ (the family likes pretty plain bread here unfortunately) I don’t really have anything to judge by.  On the plus side, this loaf is all mine ;-).  I buzzed through half a loaf at frightening speed…had to slice the rest and put it in the freezer before I hurt myself.

Any comments from those bakers more versed on fruited/nut loaves would be greatly appreciated, including any info on better methods related to treatment of those add ins (like, how long is best for soaking as well as drying, when best to add to the dough, etc).  Cheers! 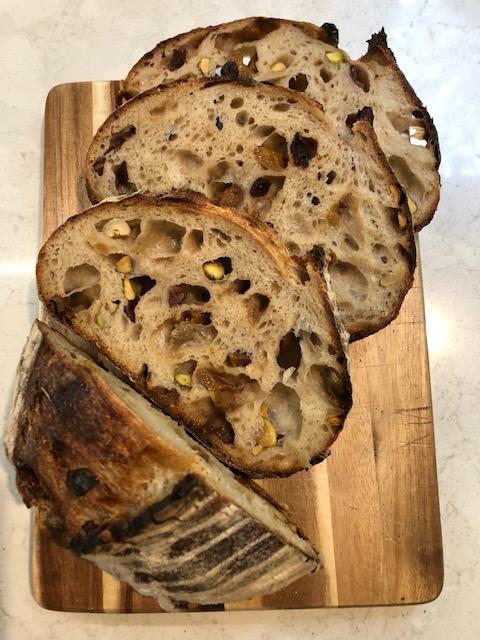 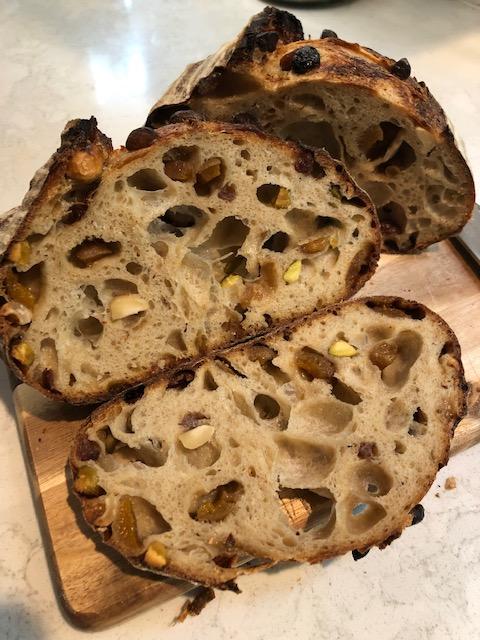