Remember that time I made Homemade Dulce de Leche? Well, I had 3 jars in my fridge that needed using. One, I ate with a spoon. One went into this pie.

Pin it now to save for later

So you remember when I made homemade dulce de leche, right? Y’all loved that I made it in a slow cooker. When I was trying to figure out what to make with it, I remembered my funfetti coffee creamer and the lightbulb went on.

I’m a girl that loves her coffee creamer. I love it in coffee, I love it in dessert. And I really love making it homemade because I can make flavors I can’t buy in the store.

Did you know that coffee creamer is super easy to make? Really, it only has two base ingredients: sweetened condensed milk and milk. Then you add your favorite extracts or flavorings.

But, with 3 jars of dulce de leche staring at me from my refrigerator, I remembered that it can be substituted for SCM in lots of things – like ice cream.

Basically this recipe has two ingredients: dulce de leche (canned or homemade) and milk. The result is a liquid that’s wonderfully sweet and has rich caramel undertones. It’s great in milkshakes, in hot chocolate, and in coffee.

How to store homemade coffee creamer

Store this in a jar in the refrigerator for up to 2 weeks. Just stir or shake before using.

How to put Dulce de Leche in Coffee

You can use this in hot coffee OR iced! Just make sure to shake or stir it before using.

Just give me an IV of coffee with dulce de leche coffee creamer!

Other Recipes to Try:

Have you made this recipe? 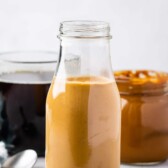 I have a physical next week. The anticipation is making me remember how much I really hate going to the doctor. Does anyone actually enjoy it? In the first place, they weigh you, and I have a problem with that. And when you’re a germophobe/partial hypochondriac, the doctors tend to look at you like you’re crazy.

{Which you totally are, but whatever.}

I think the internet has made it worse for us partial hypochondriacs, don’t you think? WebMD is probably a real doctor’s nightmare. But sometimes I actually know what I’m talking about at the doctor, but they still give me that I know you’re a partial hypochondriac look.

Actual conversation I’ve had with doctors:

Dr.: Why are you here today?
Me: I have an ear infection.

Dr.: [Partial hypochondriac look on face] hmmmm….
Me: Well, I went swimming and normally I don’t put my head under water but I did even though I knew better that I totally shouldn’t have and now I have an ear infection. It’s not swimmer’s ear, it’s a real one.

Dr.: Well, you can’t get an ear infection like that from swimming.
Me: Okay, well, I’ve had ear problems all my life. You not supposed to, you know, be able to feel your eardrum. I think normal people without ear infections or fluid actually just go through life not knowing what their eardrum feels like, so I’m pretty sure it’s infected.

Dr.: [look on face gets deeper] hmmmm…Let’s take a look.

Dr.: WOW. You have a lot of scarring. Have you had ear trouble before?
Me: Yes. LIKE I SAID. I know what I’m talking about.

See? Even partial hypochondriacs know what they’re talking about DOCTORS. (That convo? Has happened at least 3 times in my life with different doctors, FYI.)

This has nothing to do with coffee creamer, other than I love coffee and I probably shouldn’t drink so much of it.

But my husband and kid would rather I did. The non-caffeinated version of Dorothy is not one they like to deal with.