Kefir yoghurt has been a supplement to my breakfast for many years now, but I wasn’t aware that the kefir culture could be used to leaven bread until Abe mentioned it in a comment here. I don’t make a typical kefir, as what I make is very thick and like a yoghurt, I use a lot of “grains” (really gelatinous colonies of microorganisms and casein) and leave it in the milk at room temperature until the curd and whey separate (about 3 days at this time of the year) before straining the yoghurt out. What I make is more like a Finnish viili with a texture somewhat similar to ‘slimy or perhaps velvety’ commercial yoghurt.

The yoghurt is acidic and makes your mouth pucker, but I’m so used to eating it now that regular yoghurt now tastes unusual.

To make the levain I simply mixed bread flour and strained kefir in equal parts, and left it out overnight in a container:

Disappointingly, it didn’t show noticeable bubbles or growth after only one night. Then it went back into the fridge. And got another night out on the counter the following night. This is what it looked like before using and after having spent two nights out on the counter – some bubbles, but not as dramatic as the yeast water preferments, so in the final dough it was used together with some of my stiff desem starter that I had available, as I wanted to ensure the bake would leaven. Next time though, I will trust the kefir levain more and use it as the sole levain.

The complete dough (barring salt) was mixed and left to sit for 30 minutes, then mixed on slow with the dough hook for 10 minutes, then given a 30 minute rest, and finally the salt was added with some bassinage water bringing the hydration to around 70% (assuming yoghurt is about 85% water). It was then given a lamination and placed in the proofer.

With the two preferments, the fermentation was very rapid. I assume the rapidity means that the kefir levain was raising the dough in concert with the regular sourdough levain. After lamination, it took only a further 30 minutes before it had risen by about a third, so it was immediately shaped and then baked an hour and a half later. At the time of baking the aliquot had reached about 200% – so triple the original volume!

The bread got a little stuck in the banneton and getting it from the banneton to the dutch oven was challenging, which explains the irregular shape!

There was an interesting yoghurt-like aroma in the air while it was baking; and the sour tang from the kefir itself is noticeable in the taste of the final bread. 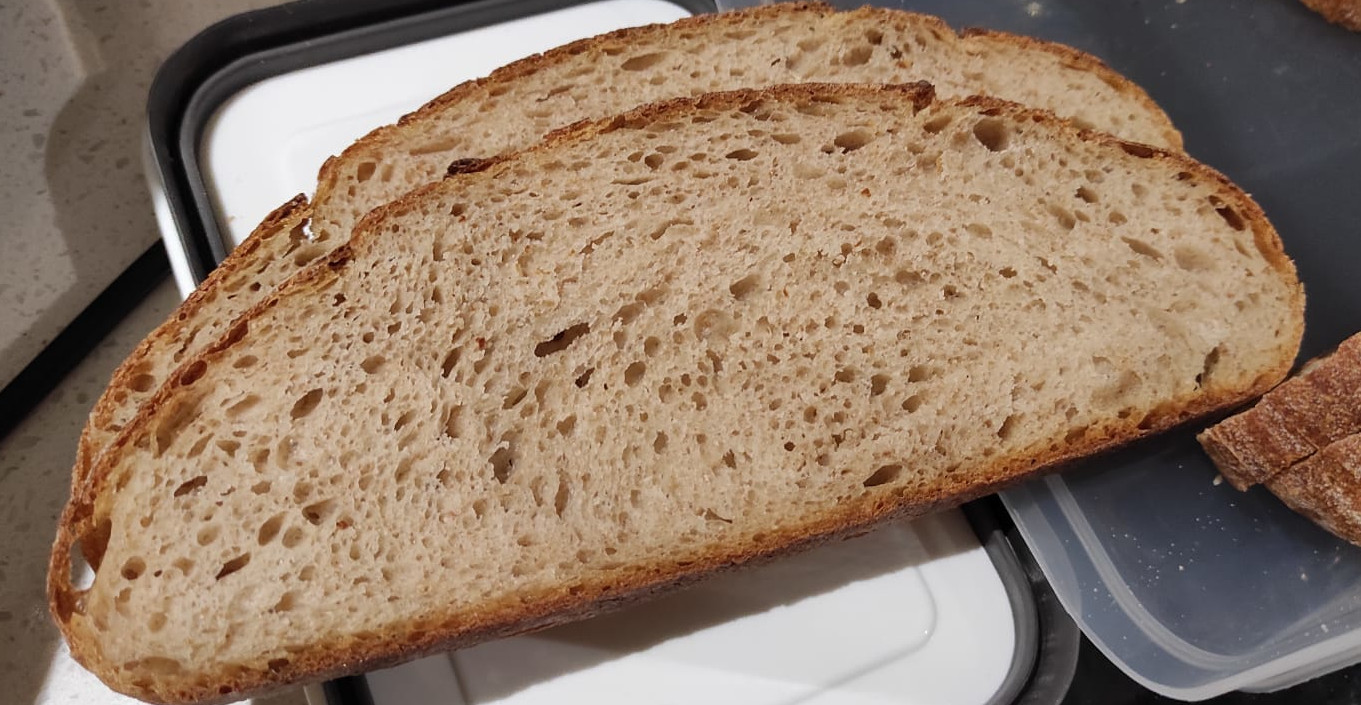 What is most interesting about this bread is the very unusual crumb texture, soft and a little silky or like a tangzhong bread and spongy mouth feel to it. I am wondering if it is from the fats in the bread (it is different to the breads I’ve made with buttermilk or oil or milk), or if this is something similar to what the CLAS people get.

The salt flavour was more noticeable too, although the usual amount of salt was used.

Definitely will make it again as I liked the bread, but I also want to see how repeatable this bake is and want to find out what it will be like when the kefir levain is the only levain.