Many of us know the feeling of the first day at a new school or on a new job. It’s a little nerve-wracking, even if it’s exciting. But what is it like to start a new job where you step into a busy kitchen and — without a pause in service — take the reins?

You’ve got a staff and diners used to the way things are and (someone else’s) menu in place, but your own ideas about how to run things, and of course, your philosophy behind what you cook.

Where do you even start?

James Moran might know. He just took over as executive chef at 8UP Elevated Drinkery & Kitchen, 350 W. Chestnut St., and was kind enough to share what this experience is like. I’ve had the chance to sample some of his new menu side-by-side with the old menu just days after he started, and it’s clear he’d brought something special with him.

But first, everything you need to know about him is in his beef tartare, which tells his story and his philosophy on one beautiful plate.

And let’s just get that out of the way first: I’m a tartare snob. When I abandoned nearly a decade of vegetarian ways to become an omnivore, I traveled to France to discover a new world of cuisine. And when your first few tartare experiences includes one prepared tableside at the esteemed Plaza Athénée hotel in Paris, well, sorry-not-sorry, but not just any heap of raw steak will do.

Moran’s rendition encapsulates his quest for balance in every bite. Not just balance in elements like acid and spice, but in texture and composition. A bite of squishy tartare can be off-putting if you stop and think about what you’re eating. Adding puffed quinoa brings a crispness to the equation.

The voluptuousness of a tartare dish can also grow quickly overwhelming so he adds acid with pickled celery. He knew it needed some brightness, too, which comes in the form of a citrus sumac crème fraiche. Weaving it all together is a spicy calabrian chili.

A glorious egg yolk crowns it all and once you release the molten gold you have the Midas touch. Each bite reveals the unexpected layers that have come together for what — for me — is the perfect summer dish. Only swapping the standard issue bread served on the side for a crusty baguette could improve upon it.

And this was just one dish he broke out of the gate with. Moran hopes a diner who enjoys the tartare will have their curiosity piqued because he wants them to next wonder how the scallop will be (sweet and tender!) and how the octopus will taste.

If he has a signature dish, by the way, it’s the wood-fired octopus with gochujang soy, charred scallion oil, and almond.

“I’m half Korean and grew up eating octopus with gochujang [a Korean red chili pepper paste],” he said, so over the years he’s evolved a riff on it.

The dish was a big seller when he worked with chef Anthony Lamas at Seviche, 1538 Bardstown Road, he said, and “I’ve managed to make it better and better. That’s one that brings back childhood memories of my mother. I lost her in 2016. In Korean culture food is a celebration and anytime I make kimchi or octopus that reminds me of her.  The guest can taste that my soul is in there and my passion. Guests can tell when you’re cooking with soul.”

The new menu, rolling out now, speaks to Moran’s passions as well as the number of cuisines he’s worked with.

His guiding principle, beyond balance, is seasonality, he said.

“A lot of restaurants take protein and build on that. I take what’s in season and build protein around that,” he said.

But Moran didn’t just walk through the doors and announce it was time to do things his way.

“You can’t shock the system, you have to take baby steps in the right direction,” he said.

You may like: An ode to fries. Here are the 5 best places to eat fries in Louisville 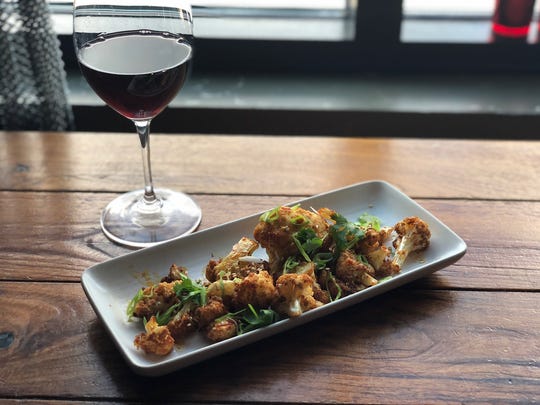 Coming into a new restaurant, “you have to come in walking on eggshells but cracking the whip at the same time. When you have a staff accustomed to doing it one chef’s way and a new chef comes in there’s always a little bit of doubt,” he said.

The best way to earn the staff’s respect and trust — and get them on board — he said, is “you get in there and roll your sleeves up and get dirty with them. I haven’t had a day off since I started. I scrub tables, I wash dishes, and they see that I’m not just drinking coffee and pointing fingers.”

Meanwhile he got things organized, starting with the walk-in coolers, and ramped up cleaning.

“I ran Seviche for years and we were voted cleanest kitchen in Kentucky on a number of occasions,” he said. “Anthony and I clicked because we both had these standards as far as sanitation and organization and cleanliness.”

And “I interacted with everyone, I verbally let them know my standards. The first week is observation, I don’t want to come in and say ‘you’re doing this wrong.’ I see who’s chewing gum, I see who’s on their cell phone but I focus on the things they’re doing right and build from there.”

He didn’t intend to change the menu the first week. “Usually that’s a little unheard of. But we still had a heavy winterish menu [and] everybody was fairly new.”

It was easier to start fresh than have the staff get him up to speed, he said, and they were struggling with consistency.

“So I had to come in and put my stamp on it really fast, especially with my name on it — there’s a certain level of pride, as a chef, as a man, as a person,” he said.

The menu with his stamp on it is rolling out now. Explore it, but take my word for it. Order the tartare.