Firstly, thanks to Yippee on whose blog post this is based, and to other CLAS enthusiasts on this forum eg Ilya Flyamer, who have encouraged me to have a go.

First a bit of background.  I have been enjoying baking sourdough loaves for two to three years now, but have struggled to balance flavour with rise.  If I do everything to favour the yeast element of my starter (dry pre-ferment, some salt in the pre-ferment*), I get a decent looking loaf but too much acetic flavour for my taste.  If I try to favour lactic elements (wet pre-ferment, high innoculation) I get the flavour I like but getting a decent loaf becomes problematical:  I either shape and bake very soon (<20% rise) and the loaf looks under-fermented, or I leave it longer and the dough become sticky and splurgey (presumable the effect of the acidity on the protein structure) but has a better crumb structure and flavour.   Tweaking the refresh regime, using the starter earlier/later, do not seem to help much.

Using a wet pre-ferment with a yeast kicker to speed up the rise gets me my best results for flavour and structure.  So when I read about CLAS I realised that  it was really a kind of extreme case of that, using the starter for the flavour elements, yeast for the rise.

So I set about following Yippee’s instructions for whole rye CLAS.  But in fact I had to leave it in the fridge a bit before I could use it, and then I forgot that there were instructions for refreshing in Yippee’s blog so I did 2x refreshes at 1:6 y flour quantity for 8 hrs, keeping the recommended 190% hydration and 40C temperature.  (My home made proofing box will go up that high with a blanket over it.)  Whereas the stuff from teh fridge had a sharp smell, the refreshed one didn’t smell of much at all, though there were small bubbles on the surface.

As it happened it was time for a white(ish) loaf so  I followed the 5% by flour weight CLAS innoculation from the recipe in Yippee’s blog, but otherwise adapted a basic formula for sourdough that I like.  Bakers % followed by weights for 800g flour making two loaves. Percentages take into account the flour content of the CLAS.

I autolysed the flours minus the spelt for an hour then mixed it all in by hand.  Proofed at 27C in my home made proofer, which can get to 45C with a blanket over it, the dough had risen by over 50% after 3hrs 15min when I shaped it into two batards and rolled in seseme seeds, these rose a bit further in bannetons and were scored and baked at 3 hrs.  There was time for three in-bowl coil folds before the shaping. 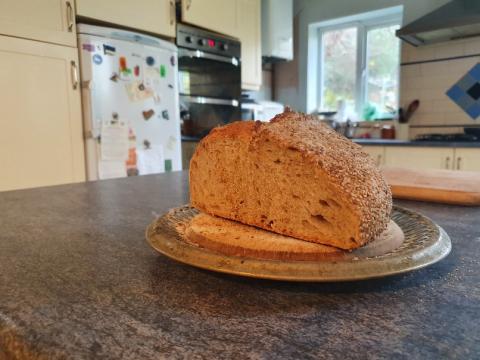 The creative carving is my wife’s work.  She adopts the traditional Welsh technique of buttering the loaf, then holding it against the chest with the non-dominant arm and carving off a slice.  The results speak for themselves I think.

But this was not about the crumby shot, it was about flavour, and I am really happy with that!  It took a few hours to develop, but a nice earthy dairy type of tang, with no real acetic notes although a slight flowery aroma has developed over time.  I guess the extent to which this develops can be controlled by how much CLAS is in the recipe (obviously) but also by how long the fermentation is (presumably the LABs will go on multuplying in the dough even though the temperature is lower than they were grown at)?  So less yeast will give more CLAS flavour, though possibly different?

So a few things there to experiment with.  For this recipe, I could try a bit less yeast and  bit more water, but my next CLAS loaf will probably be a mainly rye one, as I haven’t make a rye loaf since Christmas.

I would recommend having a go at CLAS if you have something to maintain the necessary temperature, indeed I would recommentd getting a proofer/yoghourt maker for that purpose.  All comments welcome

*This follows some discussion on the forums, particularly Tom M’s post https://www.thefreshloaf.com/node/66462/salt-sourdough-cultures.  It really works in that even with a wet pre-ferment, 4-6% salt (of the water weight) results in a great rise, but unfortunately also with the flavour profile of a drier, salt-free pre-ferment.  Overall this does not seem to be the experience of everyone, so possibly my sourdough culture is lacking yeast strains with the necessary oomph (or has LAB strains that go too quick, one of the two).