A secretly healthy chocolate cake recipe so deliciously soft and moist, no one ever believes it’s completely oil free!

It really is possible.

While low fat chocolate cake is so often gummy or dense, this recipe was specifically formulated to be just as rich and chocolatey as traditional chocolate cake, even without all the added fat and sugar.

Before trying the recipe for the first time, I was absolutely convinced it would fail.

In fact, I was so convinced the recipe wouldn’t work that I decided not to serve it to friends.

Instead, I tried the idea out on my parents when they came to visit earlier this year.

And the verdict was… they both LOVED it!

(The cake is also great with Coconut Whipped Cream or even topped with Vegan Chocolate Mousse.)

For a chocolate peanut butter version:

Use peanut butter in the cake, instead of the extra yogurt.

Frost with the vegan cream cheese frosting recipe from my Easy Cinnamon Rolls post, and beat a half cup of peanut butter (or more as desired) into the frosting.

In the picture above, I baked mine in 6-inch pans for a smaller chocolate cake and topped it with mini chocolate chips and Homemade Peanut Butter Cups.

Instead of oil, the healthy cake relies on either peanut butter or yogurt to achieve the proper texture.

If you wish to use something else: mashed sweet potato, banana, applesauce, or canned pumpkin will also work.

My favorite version is with the nut butter (almond, sunflower, or cashew butter are fine to use instead of peanut), but the nonfat version—which is the one in the photos and also the one I served to my parents—is still surprisingly good as well. 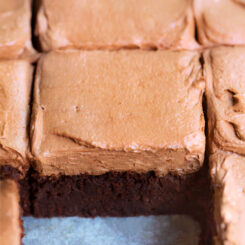 The cake was adapted from my Vegan Brownies Recipe.

As mentioned in the post, the nonfat version will be chewier than if you use nut butter (peanut butter, almond butter, cashew butter, etc.), and I prefer the nut butter version. But I served the low-fat version to my non-vegan parents and they loved it, so you might like that version too! Frosting options are listed above in the post. For a single-layer cake, you’ll need about 1/3 cup frosting.

Or this Keto Cheesecake Recipe

Brownie In A Mug