Gosh. Kicking myself that I hadn’t tried out parmesan in my breads before. This bread had a great combination of inclusions: 41g of parmesan cheese, grated from a frozen block. Fresh zest of one lemon, about 3 tsp worth. 2 tsp of dried origanum (marjoram). And 45g of Kalamata olives (13 ea). Incredible smell when it was out of the oven. I couldn’t wait the two hours for it to cool. Was cutting into it after 40 minutes, sometimes it is the guilty pleasure of hot steamy crusty bread that is the most enjoyable.

This bread is, once again, a raisin water yeast bread, and once again using the Hamelman recipe from the community bake as the base. For this one though I didn’t have time to do a double build. So there was only a single build made using 153g active and fizzy raisin yeast water straight from the fridge, with 169g strong bread flour and 57g atta, other than that (and the different inclusions) it was faithful to the community bake recipe.

The build was used 9 hours later in the final dough, which was mixed all-in-one together with the salt. Had more trouble than usual getting the stand mixer to run ‘clean’ which is my normal guide to good gluten development. Previously, with the same flours I’ve done an all-in-one mix with this recipe and had good gluten development after about 8 minutes but this bread ended up getting a whopping 27 minutes of mix time (in 10 minute intervals with some rest between) before I was satisfied. Next time I will pay closer attention as to the order of adding items to the mix, and might do an autolyse or delay the addition of the salt (which is a great tool to tighten the gluten if the dough isn’t developing satisfactorily). 27 minutes of mix time is not typical for me, but it certainly built a nice enough crumb!

A lamination was done shortly after the mix and all the inclusions were added in then. There was no opportunity for a coil fold, as bulk fermentation was in a proofer set to 27°C (80°F) and fermentation proceeded quickly. The dough was final shaped 2 hours after the initial mix, and then had an additional 1.5 hours of proof time in the proofer followed by 30 minutes in the fridge whilst the oven completed heating. The final volume increase of the aliquot jar was 200% (in other words, the dough was three times the original volume). I’ve been pushing the volume increase of these yeast water breads to see what I can get away with lately.

I tried out “Danni’s banneton method” where the shaped dough is placed into the banneton seam side down. I like how the dough grew in the banneton after the shaping. The reason why I was trying out this technique was that I’ve been finding it difficult to score the room temperature dough, especially when it is soft and ‘jiggly’ as this one was. So the attraction for me of the method is that the bread does not need to be scored with the expectation that it should open up at the seams on the top during the bake. The seams didn’t really open on this one very much though. The exterior wasn’t exactly ugly, but it also wasn’t what I would call charming! At least the bread did not flatten out.

The interior of the bread was lovely. Could taste all of the various flavours and the parmesan and lemon flavours dominated. I might use less lemon next time as it was perhaps a little too strong. There was an interesting layering of the crust at the base of the bread and the crust had that enjoyable glassy brittleness. Not sure if that was from the seam side up method or from the long mix time the dough had. 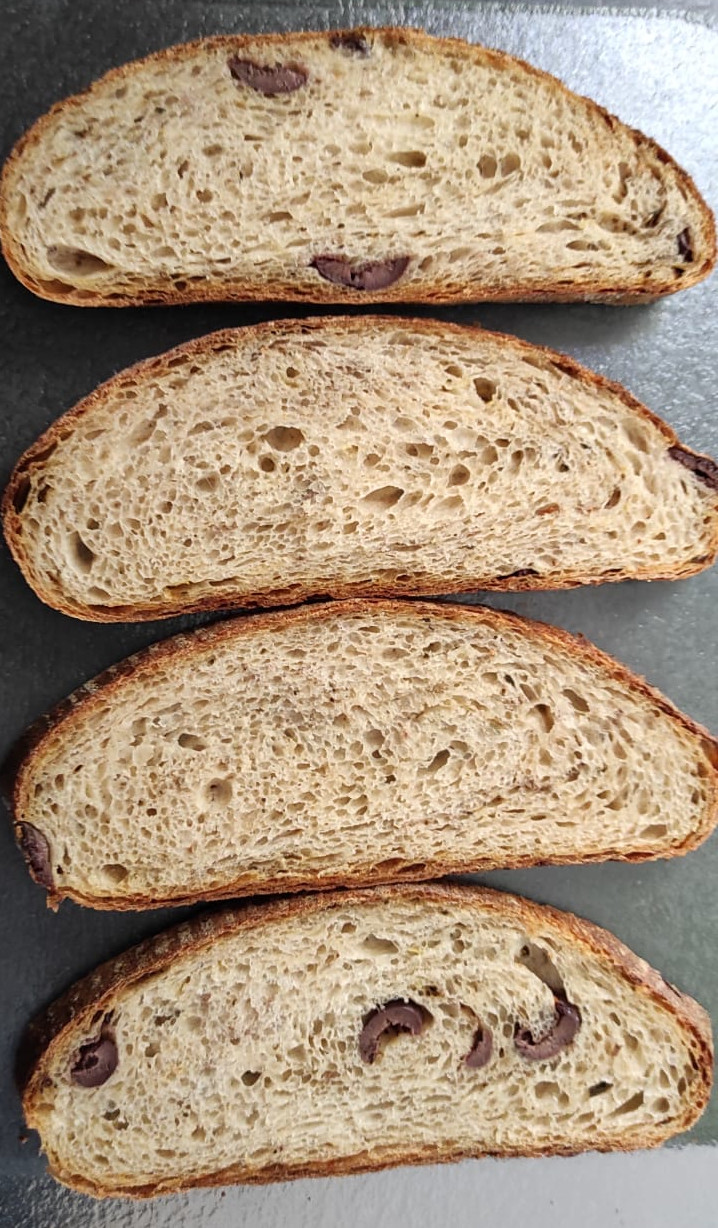