I wanted a dessert to celebrate an occasion tonight so decided I’d try a different curd than my last one and rather than a pate sucrée used a pate brisée.  For the pastry I decided I would try J Kenji Lopez-Alt’s recipe which I’ll share below.  I was interested in trying his newest recipe because instead of incorporating the butter such that it is in sheets separated by the dough, the butter is first made into a paste with ⅔ of the flour.  Only after the paste is made do you then add the flour, blitz and then fold in the water by hand.  The reasons why are below. 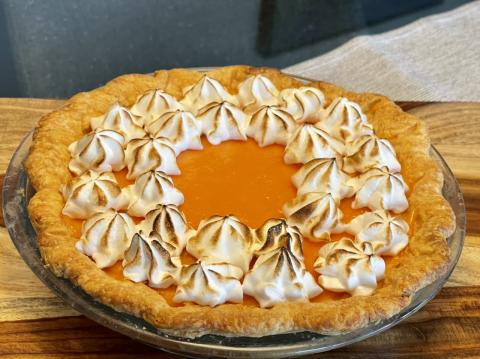 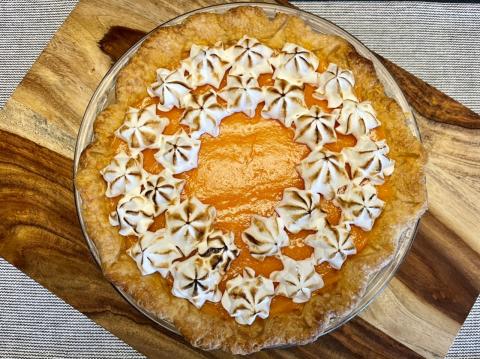 What I’m after: The kind of crust that’s substantial enough that it doesn’t sog-out from a juicy filling but tender enough that it flakes in your mouth into buttery shards. A crust with substance, but not chew. A crust that divides along deep faults into many distinct layers separated by tiny air spaces and that cracks when bent. A crust that is never leathery or pliant, but not so tender or crisp that it crumbles instead of flakes. And of course, it should have a deep butteriness coupled with a balanced sweet and salty flavor.

You see, it turns out that when it comes to pie dough, our existing model has it wrong. In fact, it’s not the fat that’s coating pockets of dry flour. It’s the reverse. It’s the flour that’s coating pockets of pure fat. With this model, things make much more sense. You can easily and intuitively see how fat gets coated with flour (think about dropping a pat of butter into a pile of flour, but on a much smaller scale), and with this model, when you add water, you are indeed moistening dry flour so that it can form sheets of gluten.

But there’s a third element at play here that is often ignored: the flour-fat paste that forms at the interface between the pure fat and the dry flour. With this paste, what you’re getting is essentially single particles of flour that are completely coated in fat. Since they can’t absorb any water, they end up behaving in much the same way as pure fat.

This over-processed dough is mostly composed of a flour-fat paste. Even without adding water, it’ll come together into a ball, though when baked, it won’t form flaky layers. Or will it?.

To summarize, here’s what we’ve got as we’re forming a pie dough:

And if this flour-fat paste functions similarly to pure fat, doesn’t that imply that we can completely replace the pure fat with this paste? Indeed, we can.

This beautiful, flaky pie crust was made with an over-processed dough like you see in the image directly preceding this one. But in order to get this crust, I had to take one additional step: add some more all-purpose flour to the flour-fat paste I’d formed, pulse it a couple times in the food processor just to distribute it evenly, then proceed just like a normal pie dough. I added water, chilled it, rolled it, and baked it.

The Benefits of The Food Processor Method

So that’s all very interesting, but the real question is: Why should you care? How does this make forming pie dough any easier?

It does so in two ways. First off, this method completely removes the variability of a traditional pie dough recipe. By weighing out a given amount of flour and fat, combining them together until they form a near homogeneous paste, and then adding the remaining dry flour to that paste, you are very strictly defining exactly how much flour is used for gluten formation and how much ends up coated with fat. No more trying to visually judge whether the fat is properly cut into the flour. No more adding ice water a drop at a time until a dough is formed. The dough comes out the same, every single time.

The other key advantage is that your dough becomes much more pliable. The flour-fat paste formed at the beginning is much softer and more malleable than pure butter, which means that your final dough rolls out smoothly and easily with little-to-no risk of cracking like a traditional pie crust, even without the vodka.

On Butter, Shortening, and Lard in Pie Dough

The question of which fat makes the best pie crust is prime stomping grounds for eternal debate between bakers, and it comes down to a battle between texture and flavor.

Because of these various characteristics, many recipes call for some combination of butter and shortening. In that case, shortening is so much softer than butter at room temperature, it’s much more likely to form the fat/flour paste while the butter remains in discrete chunks. However, when using the method I’ve outlined above, you can cut the amount of shortening down to nothing, if you’d like. Depending on how tender you want your crust to be, anywhere below a 4:1 ratio of butter to shortening will work. To be honest, most of the time I’ll make all-butter crusts, simply because shortening is just not something I keep lying around the house.

Tips For A Perfect Pie Crust

Finally, let me offer you a few tips to make the most out of your crust, no matter what recipe you decide to use.

Get yourself a scale. Honestly. Do it. You will not regret it. Measuring dry ingredients—anything more than a few teaspoons—by volume is simply not accurate. Depending on how tightly packed it is, the weight of a cup of all-purpose flour can vary by as much as 50 percent. 50 percent!!! No such problems with a scale. Five ounces of flour (the equivalent of one cup) is five ounces of flour, no matter how tightly it is packed.

Use a Food Processor

If there’s one reason to own a food processor, it’s to make pie dough. Nothing is as efficient or as consistent at cutting fat into flour. A stand mixer will do the job reasonably well; a pastry cutter will, too, though it requires much more work. You can even get a great dough using just your fingers. But, for the sake of pure ease, if you’ve got the processor, use it.

Just like with grinding meat, the key to great pie dough is to make sure that your fat doesn’t melt too much. If your home is hot, make sure that you chill your dough as you work with it. In the summer with my oven on, the apartment pushes 80°F (27°C). Under these conditions, I’ll put my dough back in the fridge three times: for 10 minutes immediately after incorporating the fat, for at least 2 hours after forming the dough into a disk and wrapping it, and for another 10 minutes after draping it in the pie plate before trimming and fluting the edges.

Use a Spatula to Incorporate Water

Your processed flour and butter are sitting there in the bowl of your food processor and you’re tempted to save yourself a bit of cleanup by just adding the water directly in there, right? Don’t do it! Sure, it’ll work out okay, but you won’t form nearly the same level of flakiness as you do if you incorporate with a spatula. Here’s what a crust made 100% in the food processor looks like:

Compare that to the crust I made with the spatula:

See the difference? By using the spatula to fold the water into the dough, you’re even more likely to end up with flaky layers.

Use a Tapered Rolling Pin

While a ball-bearing-based heavy-duty cylindrical rolling pin might fit in a Norman Rockwell painting, the slender, slightly tapered French-style rolling pin offers far more control when rolling dough, is easier to clean and store, and is usually cheaper.

And that’s basically all I know about pie crust.

For a more traditional dough that’s extra flaky but a little less beginner-friendly, check out our old-fashioned flaky pie dough.

Sprinkle with water. Then, using a rubber spatula, fold and press dough until it comes together into a ball. Divide ball in half. Form each half into a 4-inch disk. Wrap tightly in plastic and refrigerate for at least 2 hours before rolling and baking.

When ready to shape the dough, pull out one ball, set it on a well-floured work surface, and sprinkle with more flour. Use a tapered rolling pin to start rolling the dough out into a circle, lifting the dough and rotating it while rolling to achieve an even shape. Continue rolling, changing the angle of your rolling pin as you go to get an even shape and thickness. The finished dough should overhang your pie plate by an inch or two.

Pick up the dough by carefully rolling it around your rolling pin, using your bench scraper to help lift it off the work surface. Unroll it over a pie plate. Gently lift and fit the dough into the pie plate, getting down into the corners.

For a single-crusted pie, use a pair of scissors to trim the dough so that it overhangs the edge by 1/2 inch all around. For a double-crusted pie, at this stage, fill it and drape your second round of pie dough over the top. Trim it to a 1/2-inch overhang along with the lower crust. Either way, tuck the overhanging edge(s) under itself all the way around the pie.

Flute the edges of the pie crust using the forefinger of one hand and the thumb and forefinger of the other. The single-crust pie shell is ready to be blind-baked or filled. For a double-crusted pie, brush with an egg white, sprinkle with sugar, and cut vent holes in the top with a sharp knife before baking.