This Pumpernickel bread is from a German bread book Brot backen für jedermann (Bread baking for everyone). The formula is similar to Lutz Geißler’s Hütten-Pumpernickel. The dough consists of fine, medium, and coarse rye meals (Bay State Milling’s Wingold), water, salt, and rye sour culture. One of the main differences from Lutz’s process is that the coarse rye meal (Roggenschrot grob) is scalded in this recipe instead of the medium rye meal. An interesting requirement for Pumpernickel is that it must be baked for at least 16 hours to be considered Pumpernickel.

The fine rye meal has an overnight sponge at 22 °C and the coarse rye meal is scalded with twice its weight of boiling water with added salt. 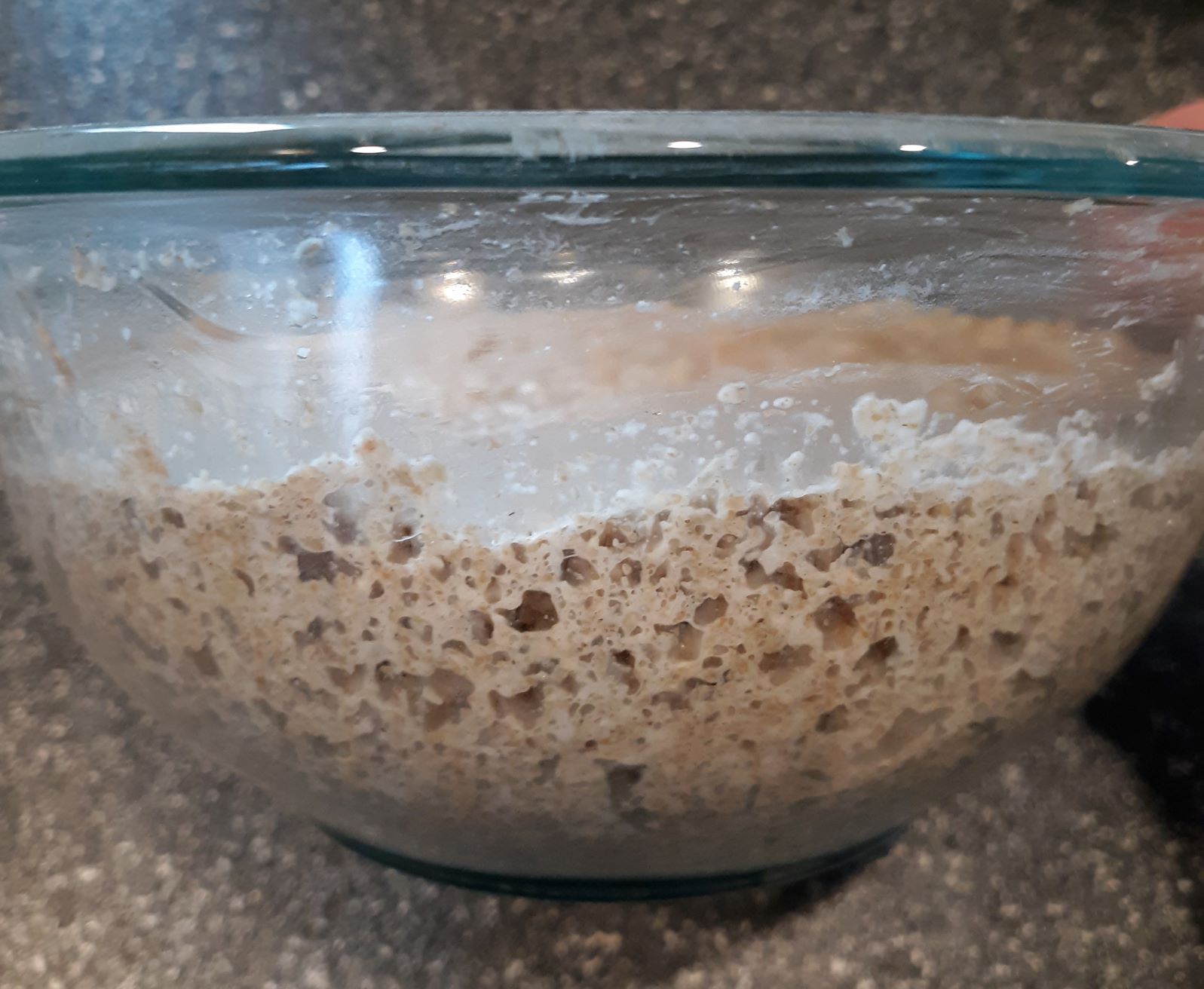 The sponge and scald are combined with medium rye meal and more water in the final dough. The dough was mixed a total of 25 minutes to break down the meals. Using wet hands on a wet surface, it was formed into a log and placed in an 8.5×4.5×2.5″ bread pan and smoothed with a wet spatula. The pan was then placed into an oven roasting bag (some online translators have problems with the German word Bratschlauch and translate it to “frying hose”) and proofed for ≈2.5 hours. I had planned to go 3 hours but I started to see pinholes in the dough. 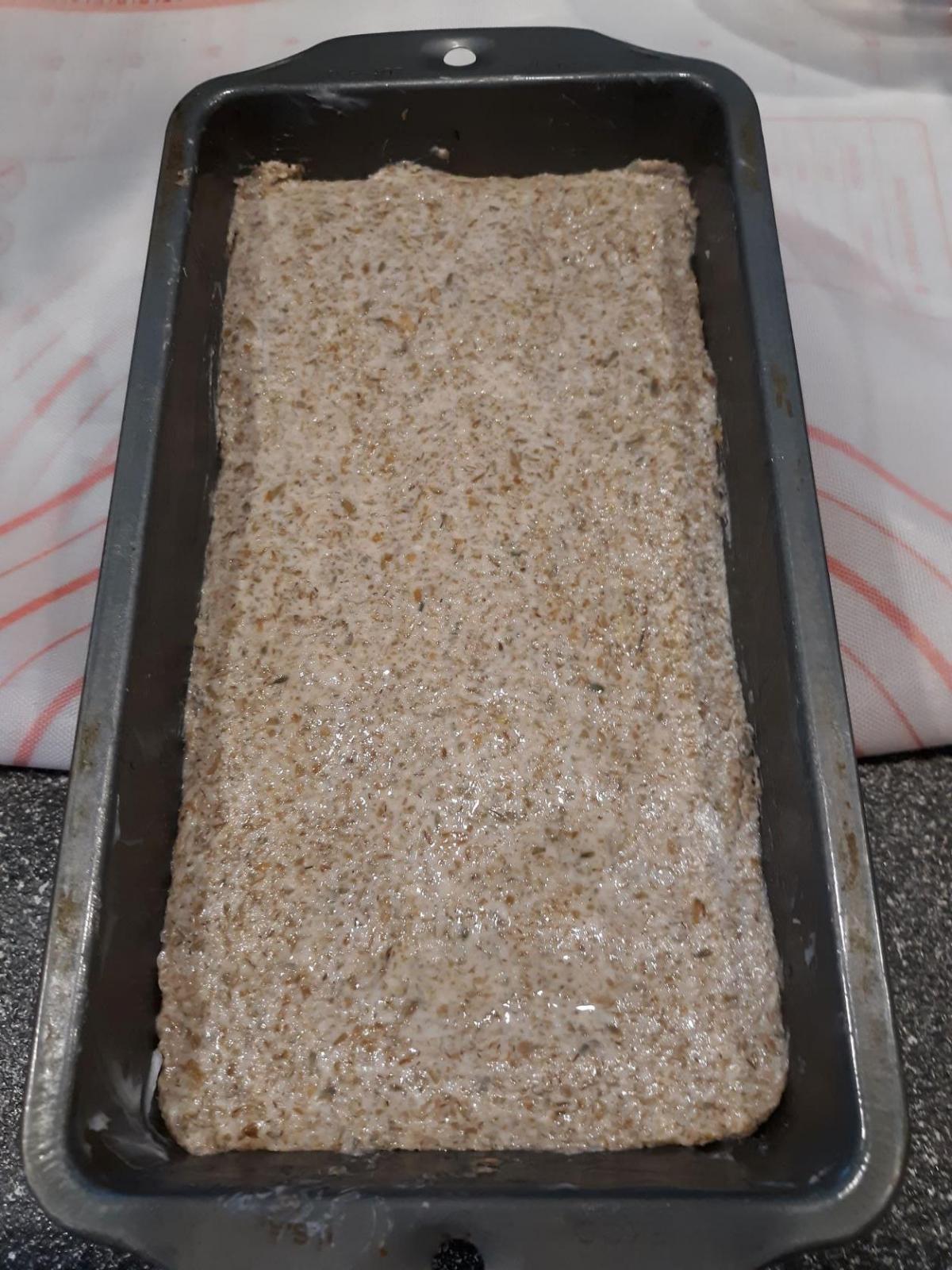 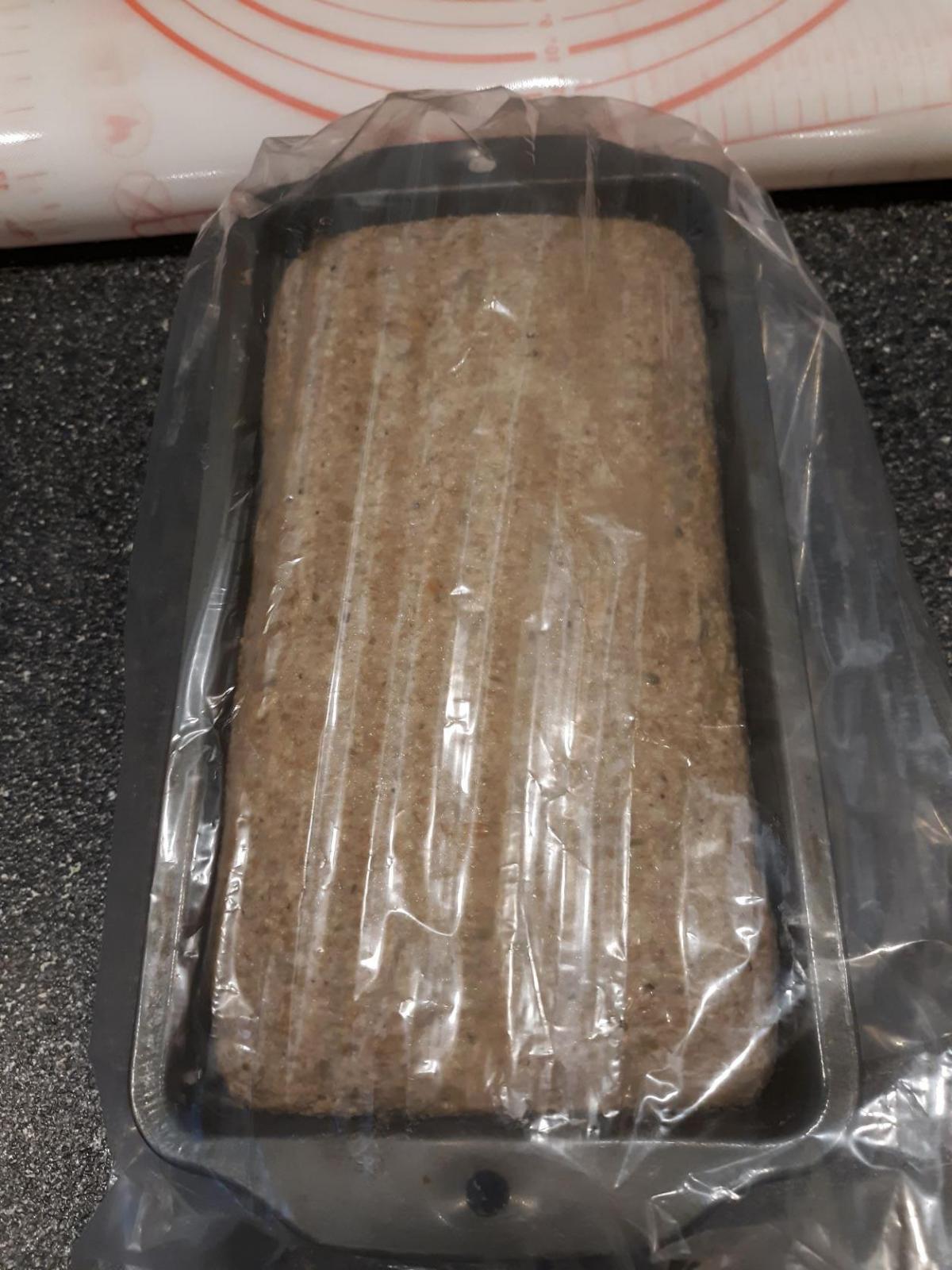 I had planned to go 3 hours but I started to see pinholes in the dough. The bread was baked for 1 hour at 120 °C and 1 h at 100 °C in a regular gas oven. Even though the lowest setpoint on the oven 170 °F, the actual oven temperature was close to 200 °F after 1 hour and the oven was cycling on and off. The pan in the roasting bag was transferred to a toaster oven that could maintain the desired 80 °C (175 °F). I placed pans above and below the bag to shield it from the toaster oven elements. The final 15 h at 80 °C was finished in the toaster oven. 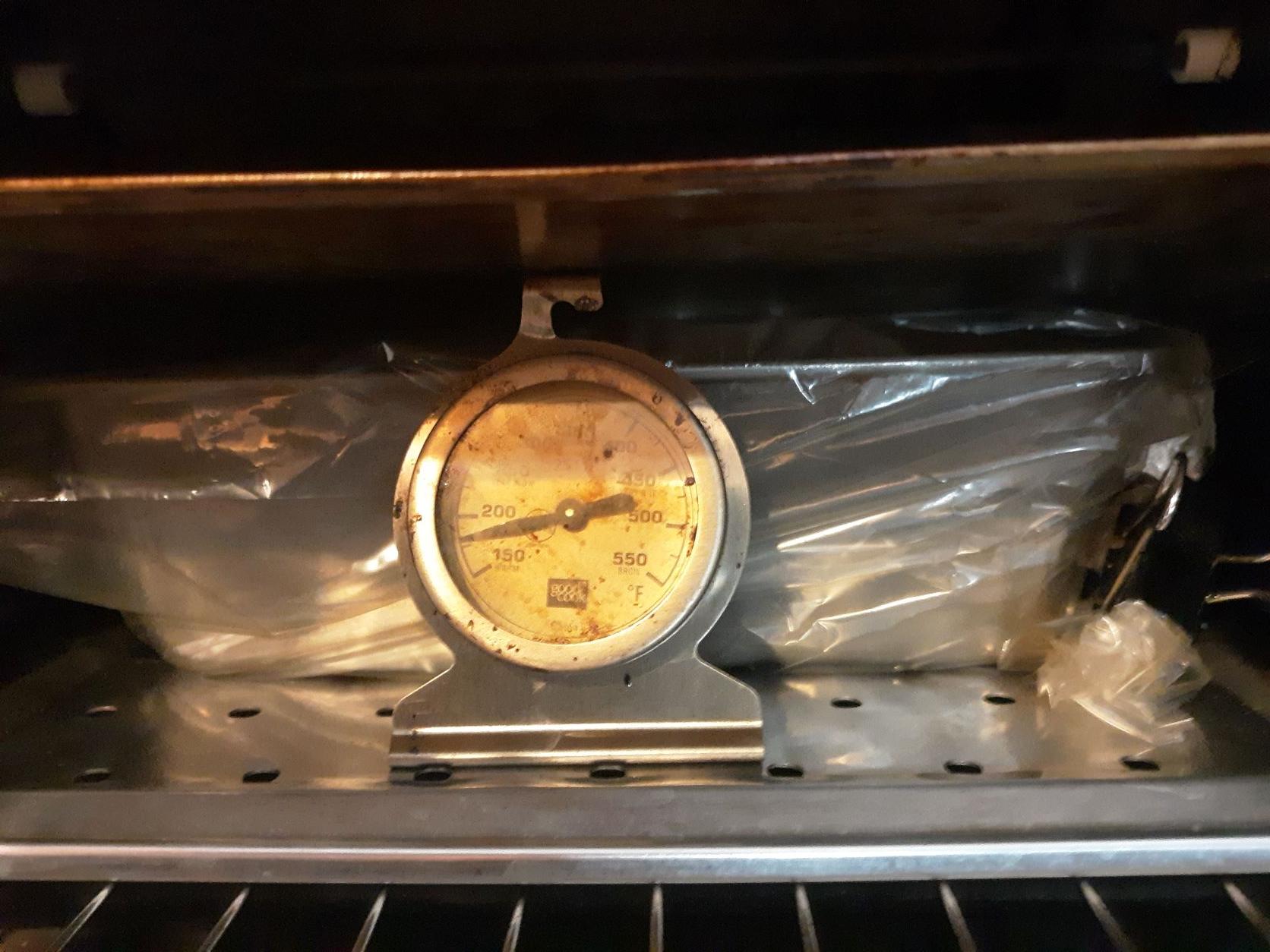 After cooling to room temperature, the loaf was stored in a plastic bag for 2 days before slicing. I was surprised that it had lost 15% of its weight, despite being sealed in the bag during the bake. I was also surprised that the crumb was very sticky and left heavy deposits on the knife used for cutting. The flavor mellowed after several more days but the sourness dominated the early slices. I would add some malt or sweetener on the next loaf. 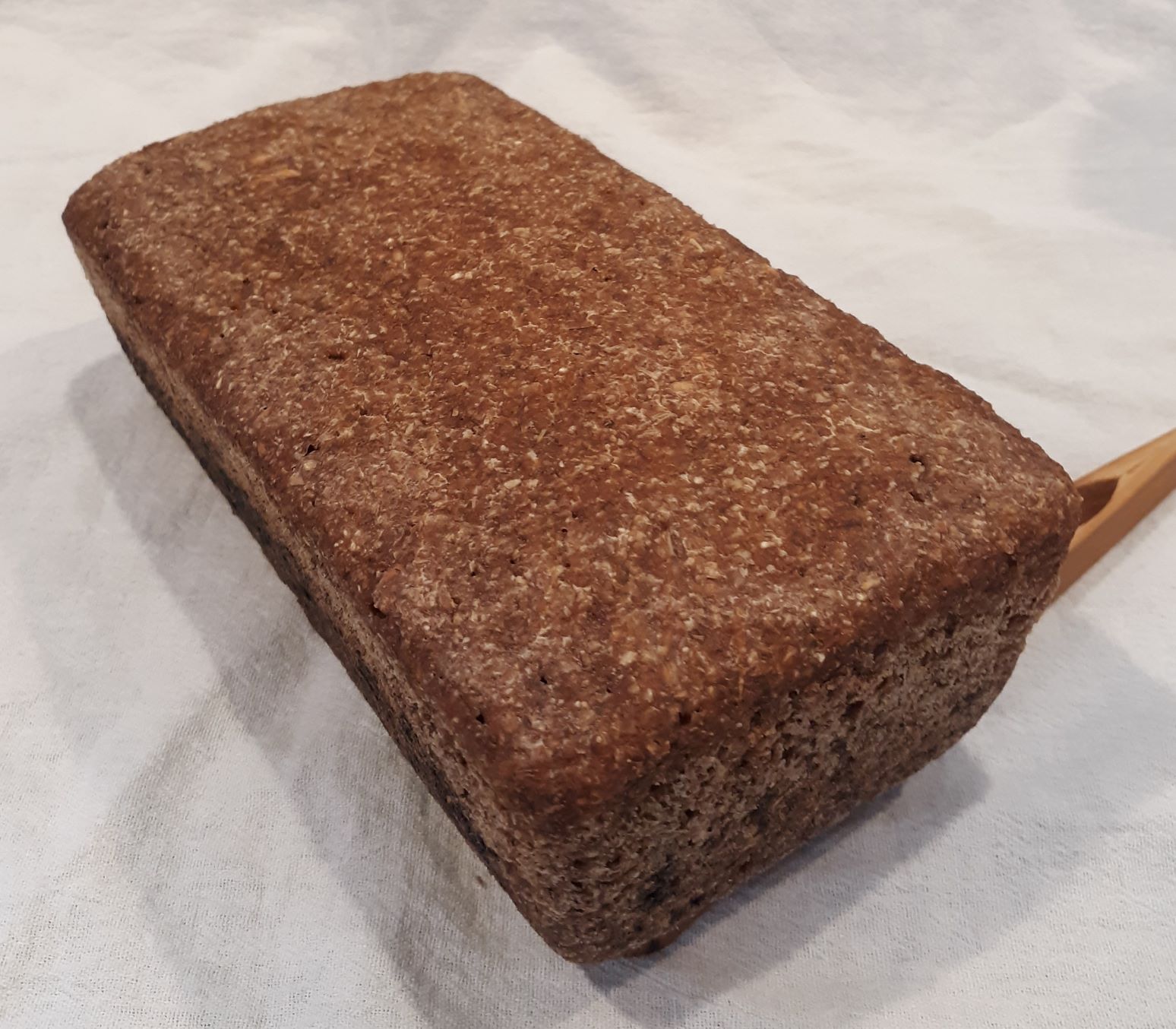 The worst shock was the amount of corrosion that the baking pan incurred. I first thought it was dried dough, but on washing realized that it was rust. I reread some of the comments on Lutz’s Hütten-Pumpernickel recipe and found that several bakers had the same problem. I’m glad I didn’t use my favorite USA Pullman pan. I’ll need a wood baking form or a silicone pan if I plan on baking this again. 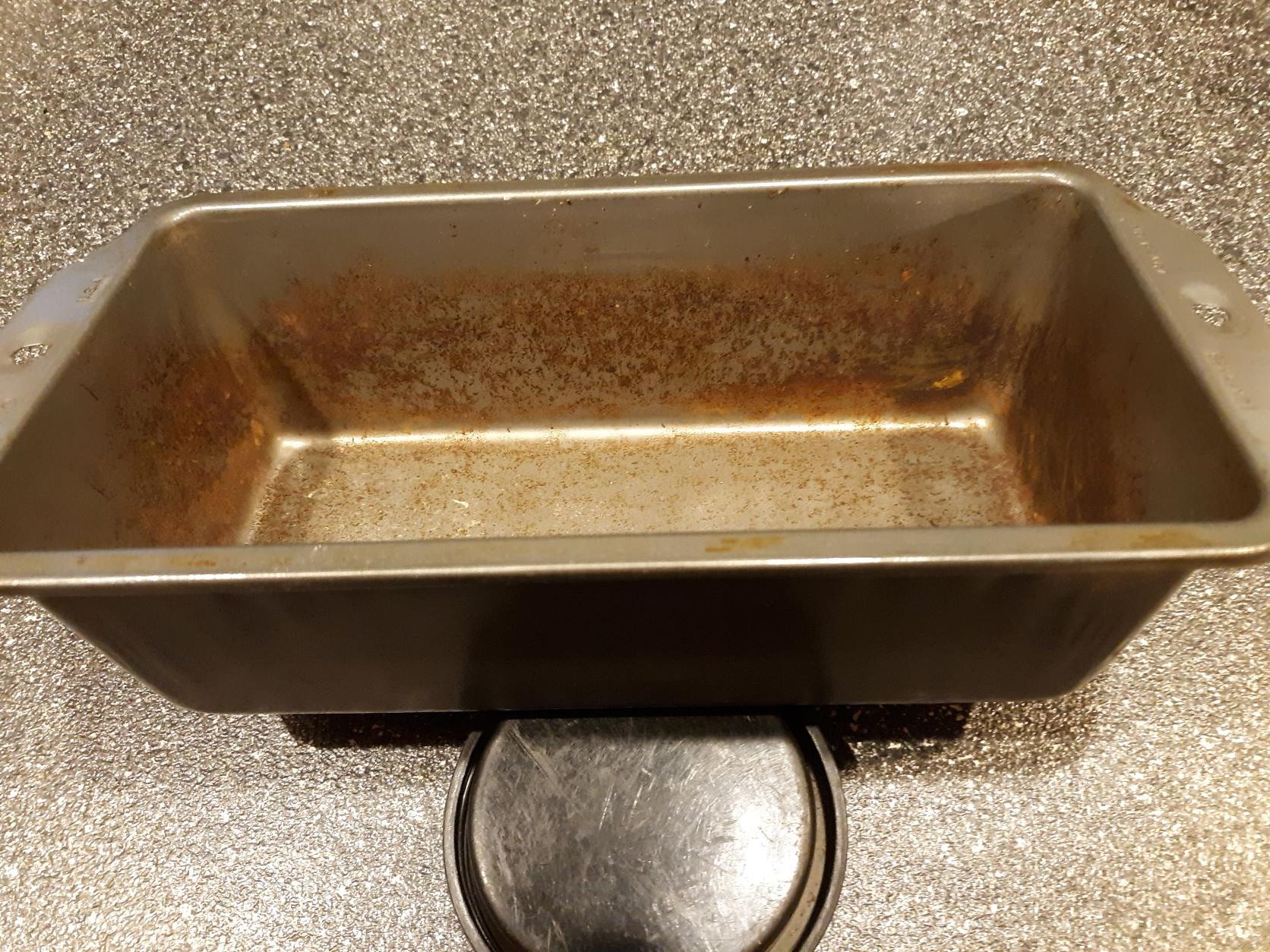