I recently read and enjoyed Tartine Bread by Chad Robertson. I was pleasantly surprised as I was reading it that my method of baking sourdough is very similar to the process outlined in the book. With that in mind I figured it would be easy to pick up any of the recipes in the book and go to town with some very mild adjustments or experimentation. All of the variations of breads listed had my mouth watering and I was (and still am) keen to try some things beyond a standard sourdough.

I settled on going first to the Rosemary Polenta Pumpkin Seed Sourdough. The Recipe as Written (RAW) on this one is a HUGE failure. Let’s step back a bit first and try to explain what happened and where it all went wrong.

I am no stranger to high hydration bread. In fact thanks to a transcription error to a notebook I keep in the kitchen I spent more than a year baking sourdough with a 91% hydration. That was a learning experience in how to build dough strength and be able to shape a boule or batard successfully. The day I realized that I had made that transcription error and went back to making 75% hydration bread I was startled at how easy it was to manipulate, shape, and produce bread with a reasonable hydration level.

This recipe however it a whole other beast. To start, Chad recommends that you begin with a recipe for the “Basic Country Bread”

Not accounting for the water or flour in the starter this is just a standard 75% hydration bread. Nothing of concern. Straight forward. This should be easy.

To a full recipe using 1000g of flour we then add the following after the first stretch and fold with no other adjustments:

2 cups boiling water (used to hydrate and soak the polenta)

Not using my acute sharpened mind and superior reasoning skills I blindly followed the recipe and this is the result.

The basic dough felt great after mixing. The soaker preparation went as planned and the polenta gladly soaked up all of the water. Look at how lovely it appears when ready to be mixed into the dough.

Once incorporated the dough smells AMAZING but is very very wet and sticky. That’s ok though, we still have lots of stretch and folds to do to build up the dough strength. In fact, over the series of stretching and folding some dough strength was build up and came close to a window pane. Good enough to move onto the final bulk before shaping.

90 min later the dough has grown 50% and is ready for shaping. However, this is where my fears come roaring into view. The dough is still super super wet, and in fact not able to be shaped. As I round off the dough the edges are not flat and are able to keep a rounded edge on the board, but it is still far to wet and sticky to actually do any real shaping or producing the correct tension in the dough. The chance of actually forming a full boule is slim to none. 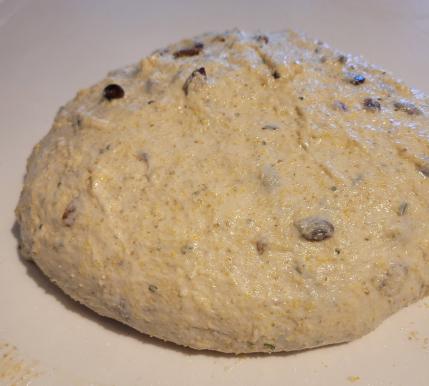 Refusing to be completely defeated and also refusing to not have bread for the week it was time for PLAN B!

Or rather PAN B – When all else fails, don’t waste dough, pan it up and see what happens. 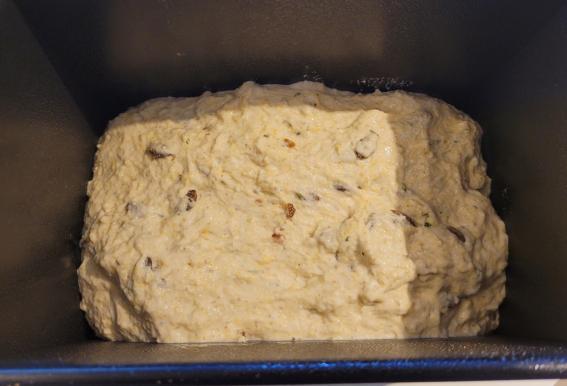 After an overnight in the fridge and a normal bake routine (About 5 min longer) we end up with this. I made sure to take a temp measurement to make sure the dough was fully cooked. 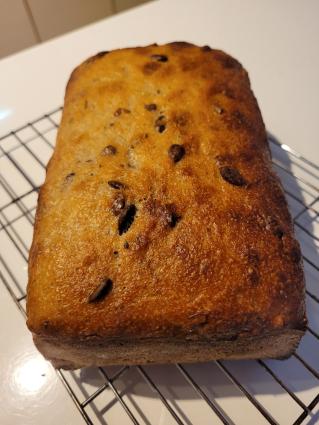 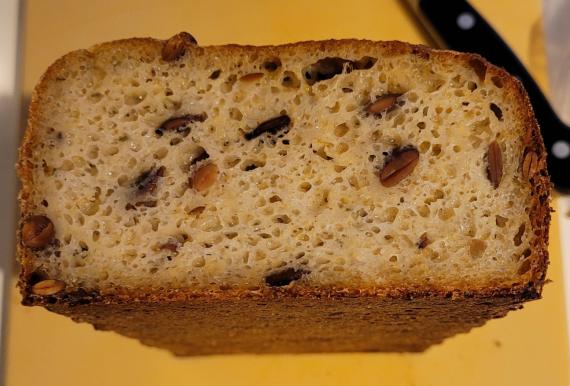 The crumb is very moist and springy. It is not gummy. If anything it reminds me of a mass produced crumpet. The smell is still divine. I had a slice as is and found the texture to be strange, which honestly is not a shock. I wouldn’t use this for a sandwich. It might make excellent croutons. 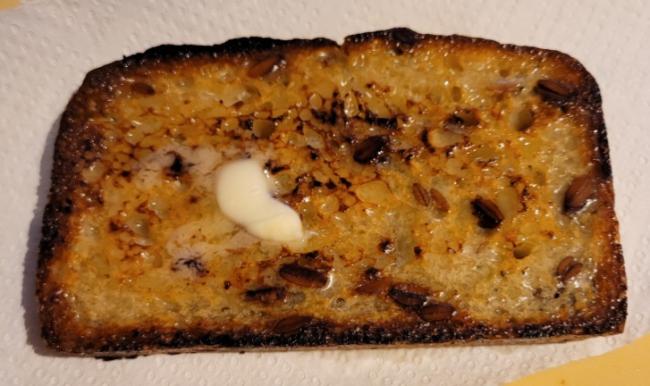 As toast it works well. The crumb developed a nice crunchy crust and the interior crumb is quite soft and creamy. I can only imagine how good this would be if it had the proper hydration, shaping, and bake. But for now that must remain in my imagination.

So what went wrong? Obviously the hydration here is WAY WAY OFF! Normally a soaker just hydrates grain and doesn’t add an appreciable amount of liquid to the overall recipe. Or at least most recipes that use a soaker have accounted for this additional liquid.  In this case it did just the opposite. What were we actually working with?

If we add the water from the soaker into the overall dough recipe it means we are dealing with 122.5% Hydration!

If we treat the corn oil as a liquid addition instead of a fat we are up to 126.4%

Finally, if we treat the polenta as “Flour” in the recipe we are still at 108.2%

To the internet! After a bit of searching it appears that this is an issue that I am not the first, nor will I be the last to experience issues with this recipe. In fact this blog post describes exactly what I encountered.

It appears that this recipe would benefit from quite a few alterations including but not limited to:

Reducing Base Hydration and keep the soaker the same

Cooking the polenta instead of just soaking

Count the polenta as flour and adjust total hydration

Tasting Notes: The rosemary is not too strong and if anything is more of an aromatic. The roasted pumpkin seeds are a nice textural addition and add a slight nutty flavor. I don’t taste the polenta but I assume it is part of the creaminess I get when the bread is toasted.  The bread, even in this “failure” state is still pleasant. I’m really curious what it is intended to taste like.

Time/Effort: Time seems completely on point for my usual routine. The effort at 120+% hydration is not acceptable.

Would I make it again: NO! FAILURE. F, full stop. Not Acceptable. Report to my office! That said, you will get another chance but will require some major revision to achieve a passing score.