I’ve got a backlog of breads I’ve been making, so I’m going to start from the most recent and maybe work my way back a bit.

I love baguettes / French bread but I’ve never made them consistently – I just have times when I obsess about them for a week or two, not get them quite how I want them, and decide it’s not worth the effort.

Obviously there’s a lot of subtlety to making them well – the shaping and baking especially – that they benefit from the really consistent routine and environment of a bakery.

Anyway, I got my hands on some French T65 flour and had another push at them. Not that French flour is essential, but it just gave me a little extra motivation to figure out this bread.

So here’s a look at the three recent bakes I made and what I’ve learned doing so.

The particular recipe I used was Hamelman’s baguettes with poolish, at 66% hydration. Technically they’re more like batards, since I can’t make them very long in my oven.

The main lesson I took from these is that it is very much possible to overbake a yeasted baguette.

In the past I had made sourdough batards which I baked dark and turned out well, staying moist and chewy inside while having a strong, flavourful, slightly chewy crust.

Also, from past experience I knew that underbaking baguettes can result in a crust that quickly softens while cooling, even if it feels solid coming out of the oven, and becomes slightly leathery, which I was trying to avoid.

But baking too thoroughly here resulted in loaves that, while quite visually appealing (and crackling beautifully while cooling), were quite disappointing in terms of texture and flavour.

The crust was too hard, thick, and strongly flavoured, detracting from the subtle flavours of the crumb. And too much moisture was baked out of the interior, leaving a slightly dry crumb, taking away some of the softness of a good baguette. 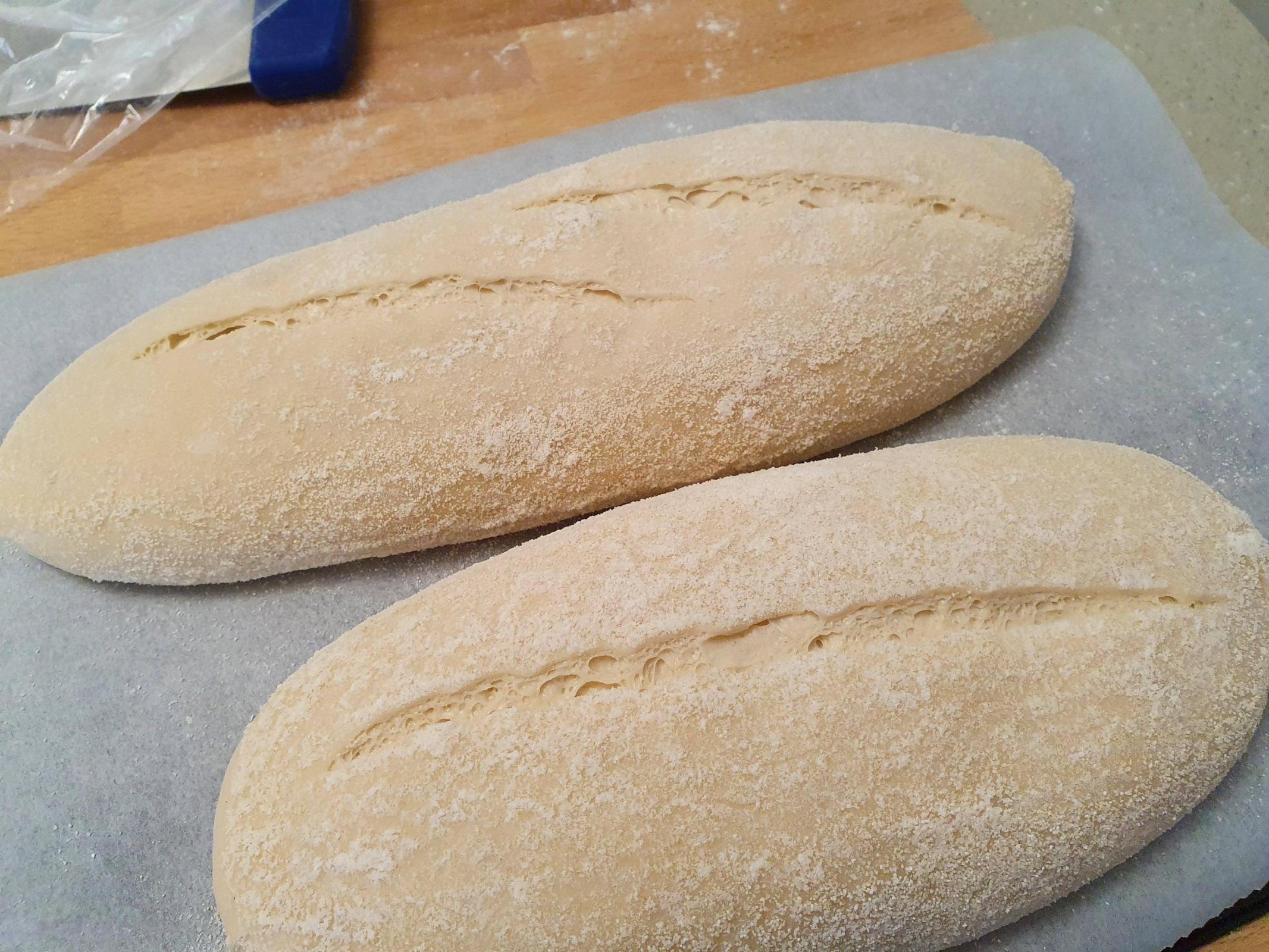 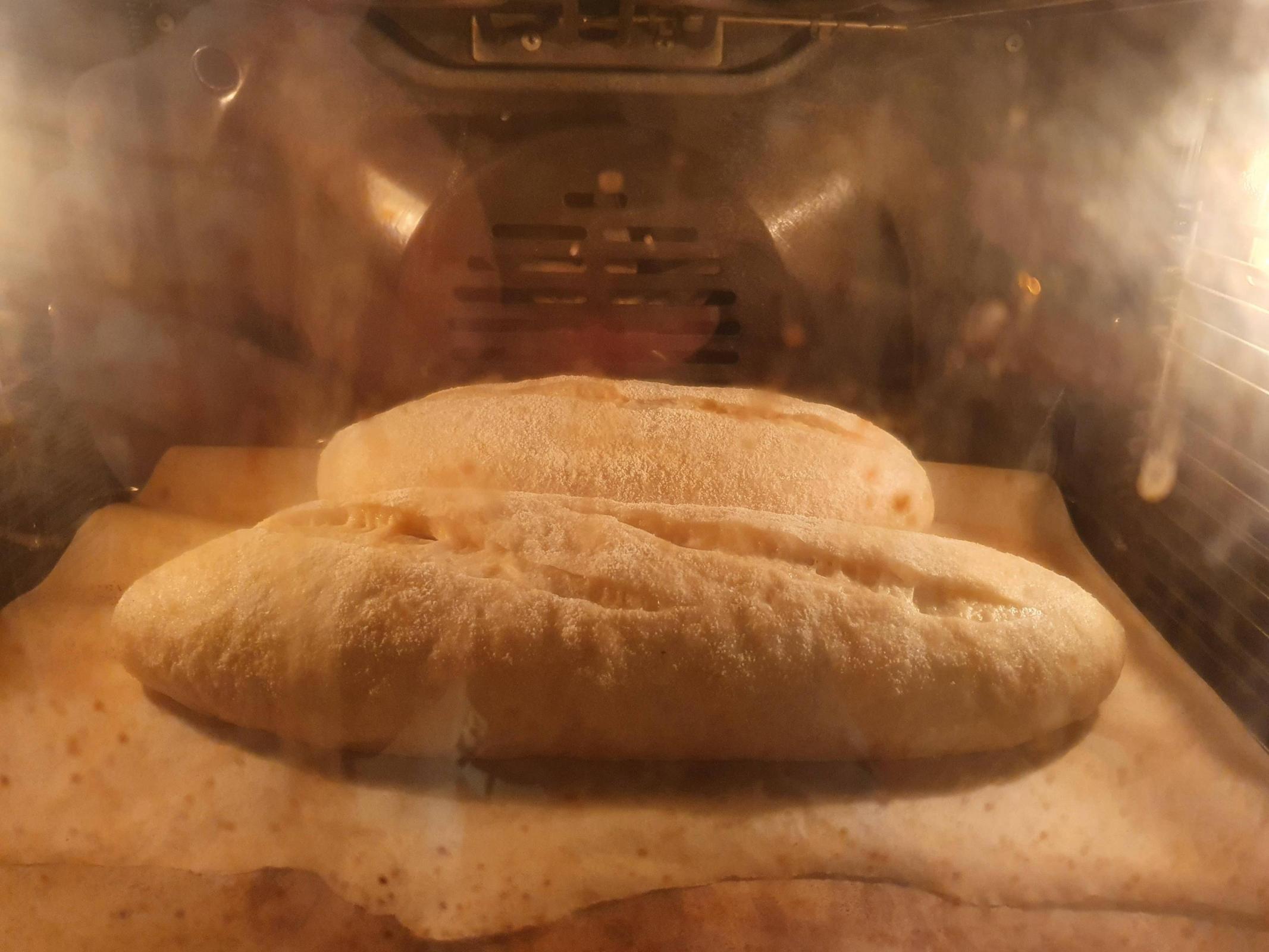 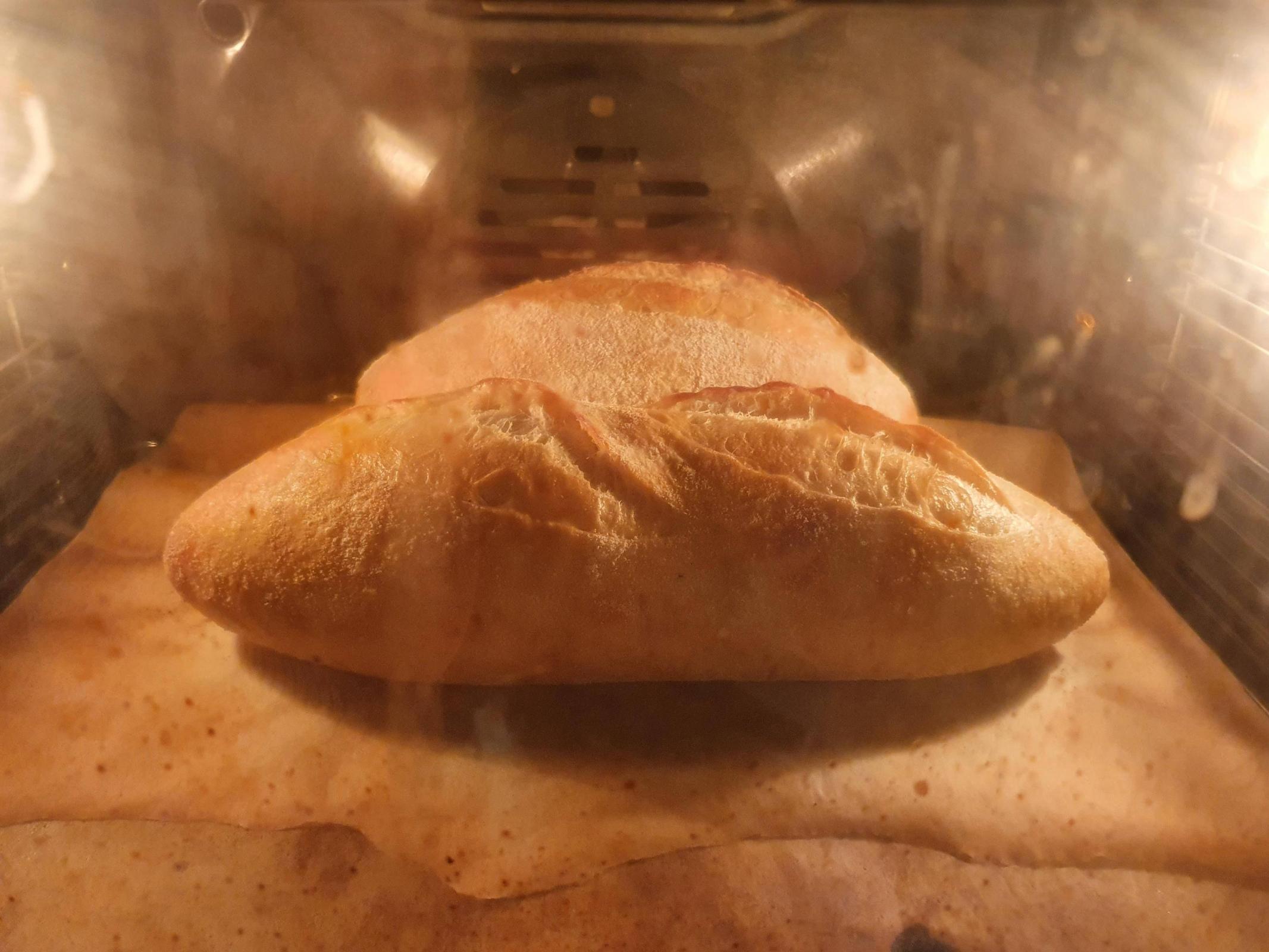 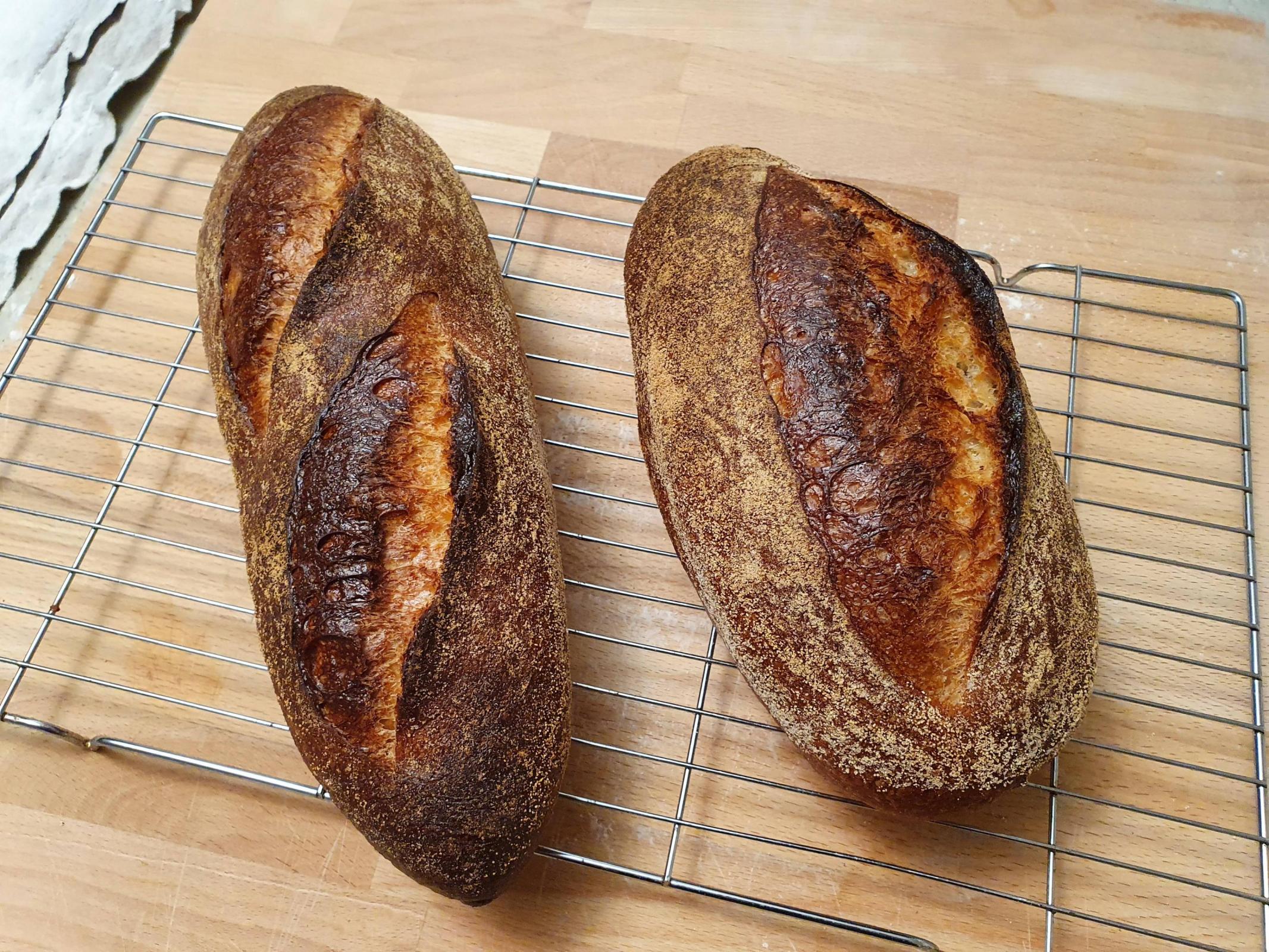 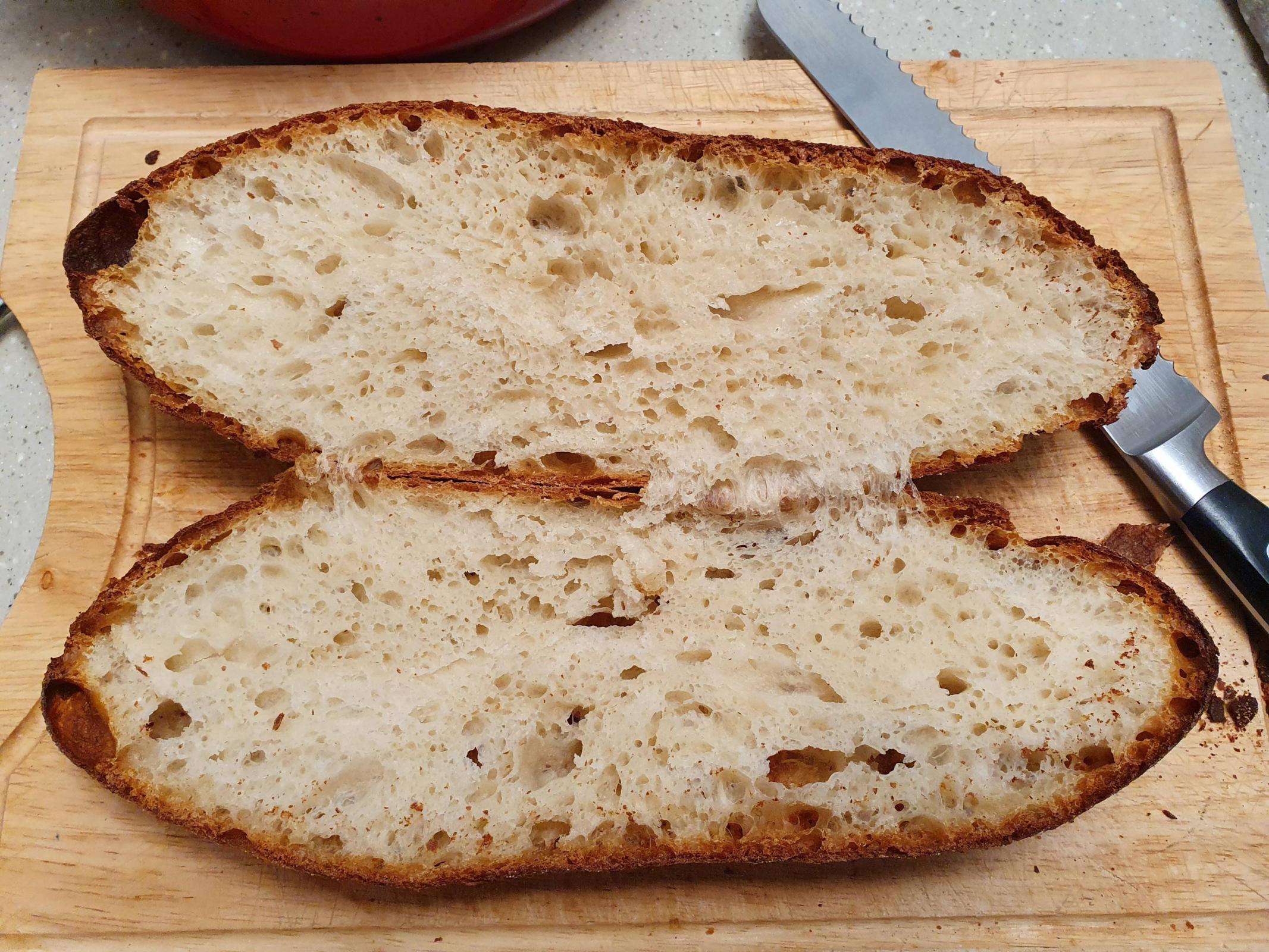 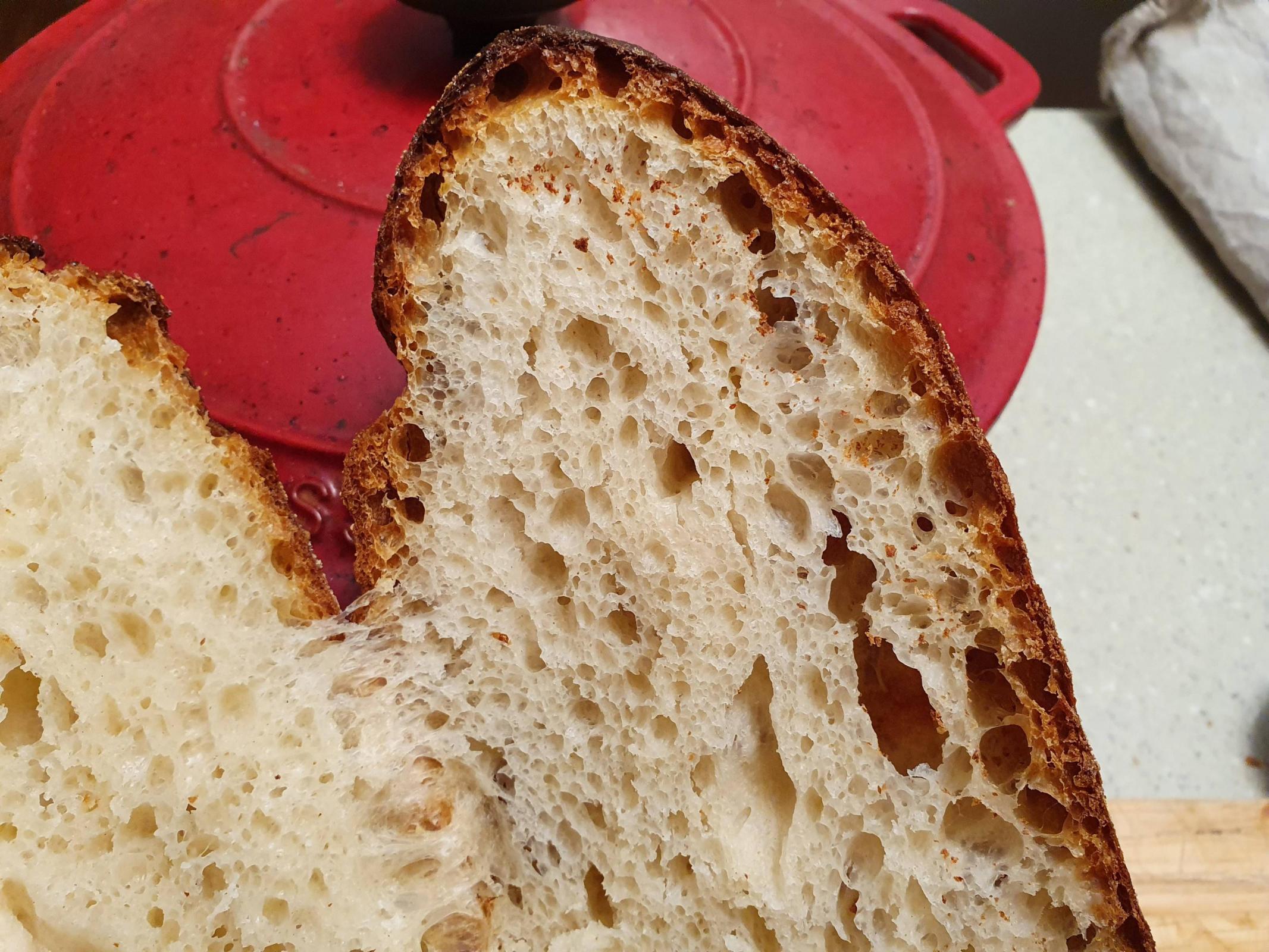 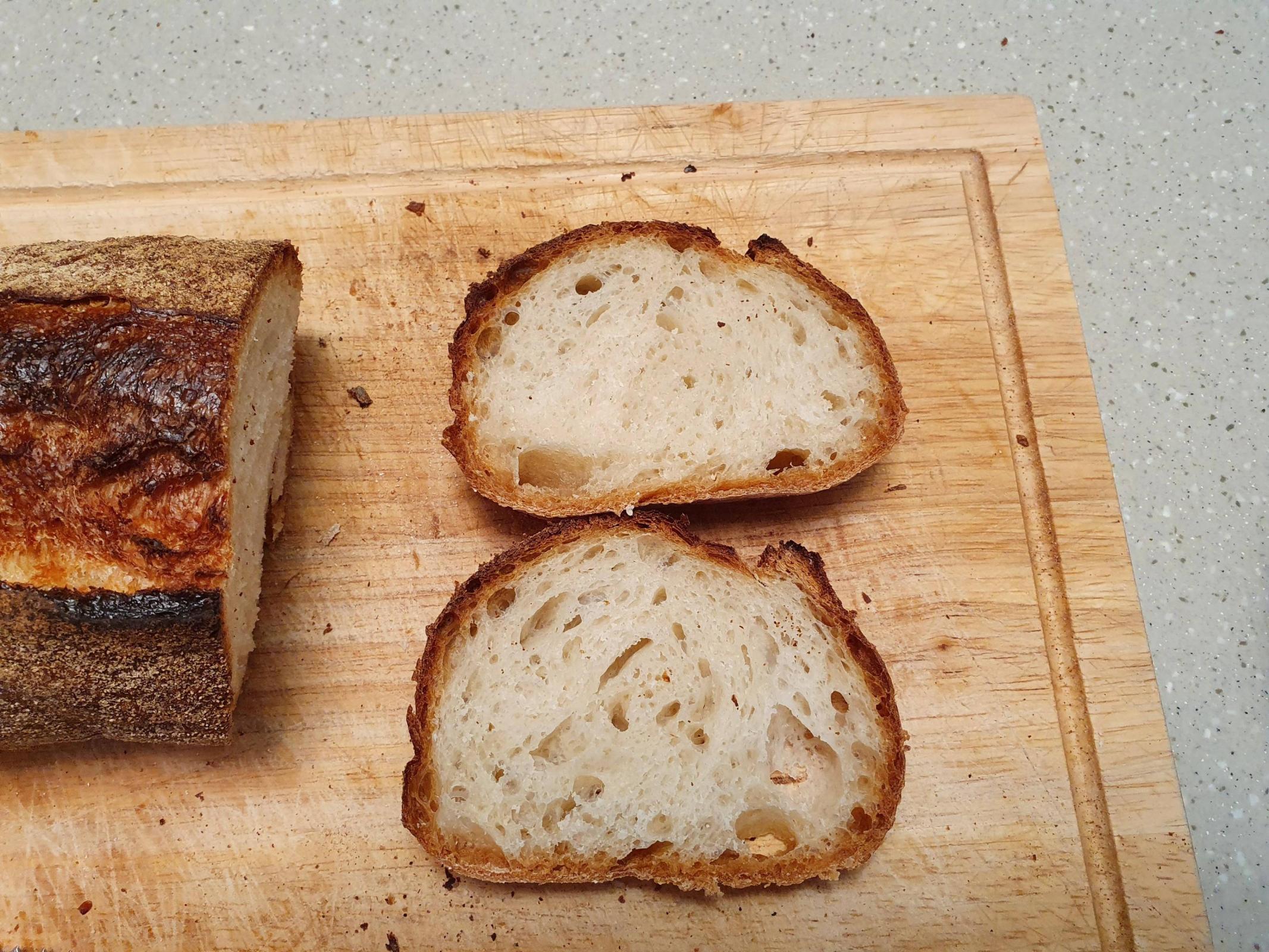 This time I went back to basics and just made the straight dough version of Hamelman’s baguettes. For some reason these are at 70% hydration compared to the 66% poolish version (which I did find to be a little on the stiffer side).

I wasn’t too concerned with making a ‘perfect’ baguette, I just wanted to play around with a few variables and see what happened.

The dough roughly doubled during the bulk, rising a bit faster than I expected (probably kickstarted by being fairly warm after mixing, about 26c, before cooling to room temp), so I only did 1 fold instead of the recipe’s 2.

I also decided to give the loaves quite a full proof, and then also got a bit distracted, so that I felt they were ready for the oven before I had even started preheating it.

As a result they were verging on overproofed by the time I loaded them – very light and well expanded, a little fragile, but not quite ready to collapse.

I baked these loaves for a shorter time than before. The loaves had a nice golden brown colour and felt solid and light. They softened quite a bit while cooling, but not completely – there was still a little crunchiness.

They only had a tiny amount of oven spring, but held their shape and did not collapse.

As a result, they were not particularly visually impressive, but I was really surprised by how good the flavour and texture tuned out to be.

The flavour was subtle, buttery and wheaty, and far superior to the poolish baguettes above. Presumably this was developed by the full proof and active bulk ferment, and brought out by the milder, chewier crust and soft, moist interior.

Being less dry, this bread also kept much better and was still very tasty the next day, lightly toasted. 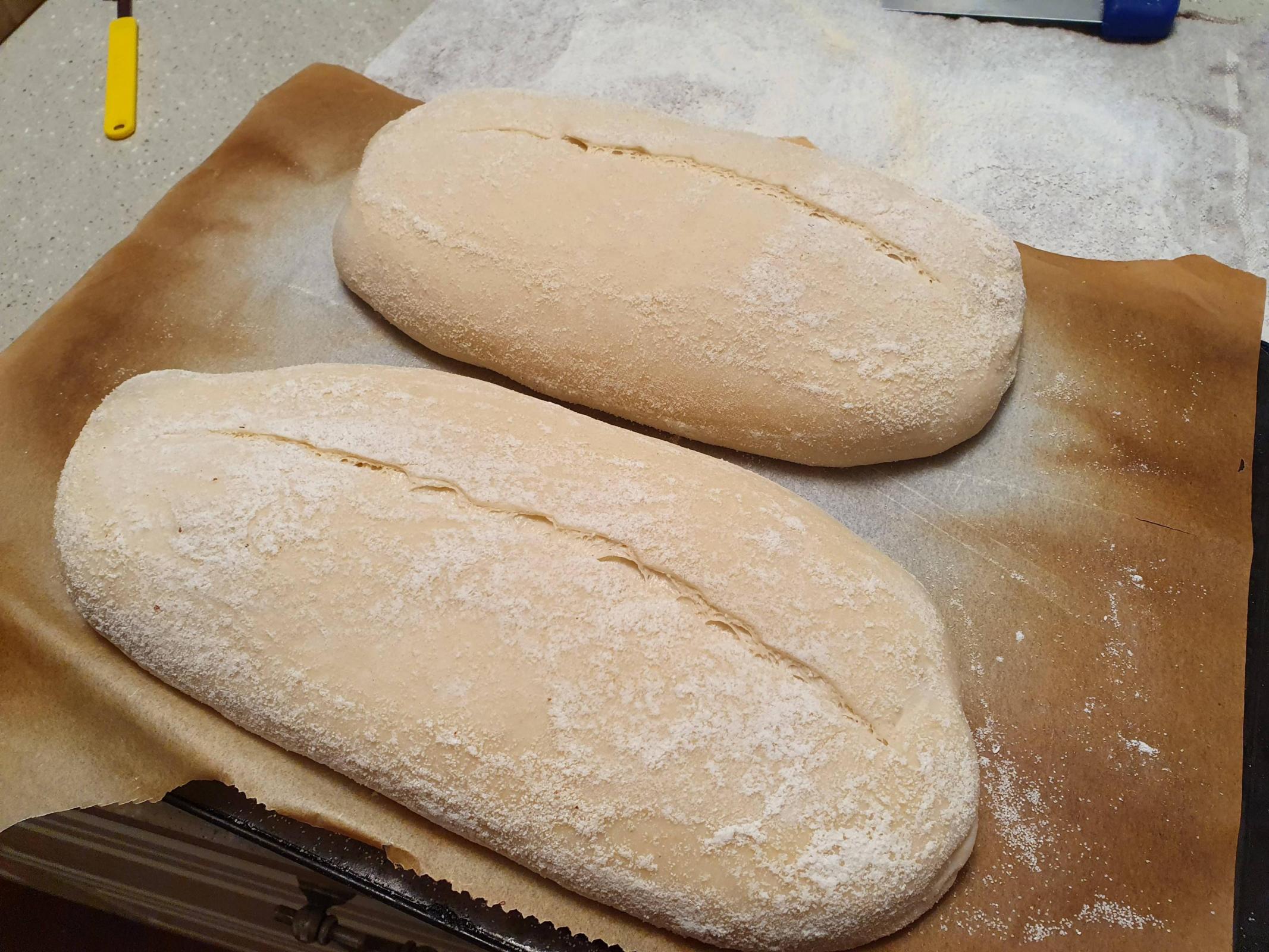 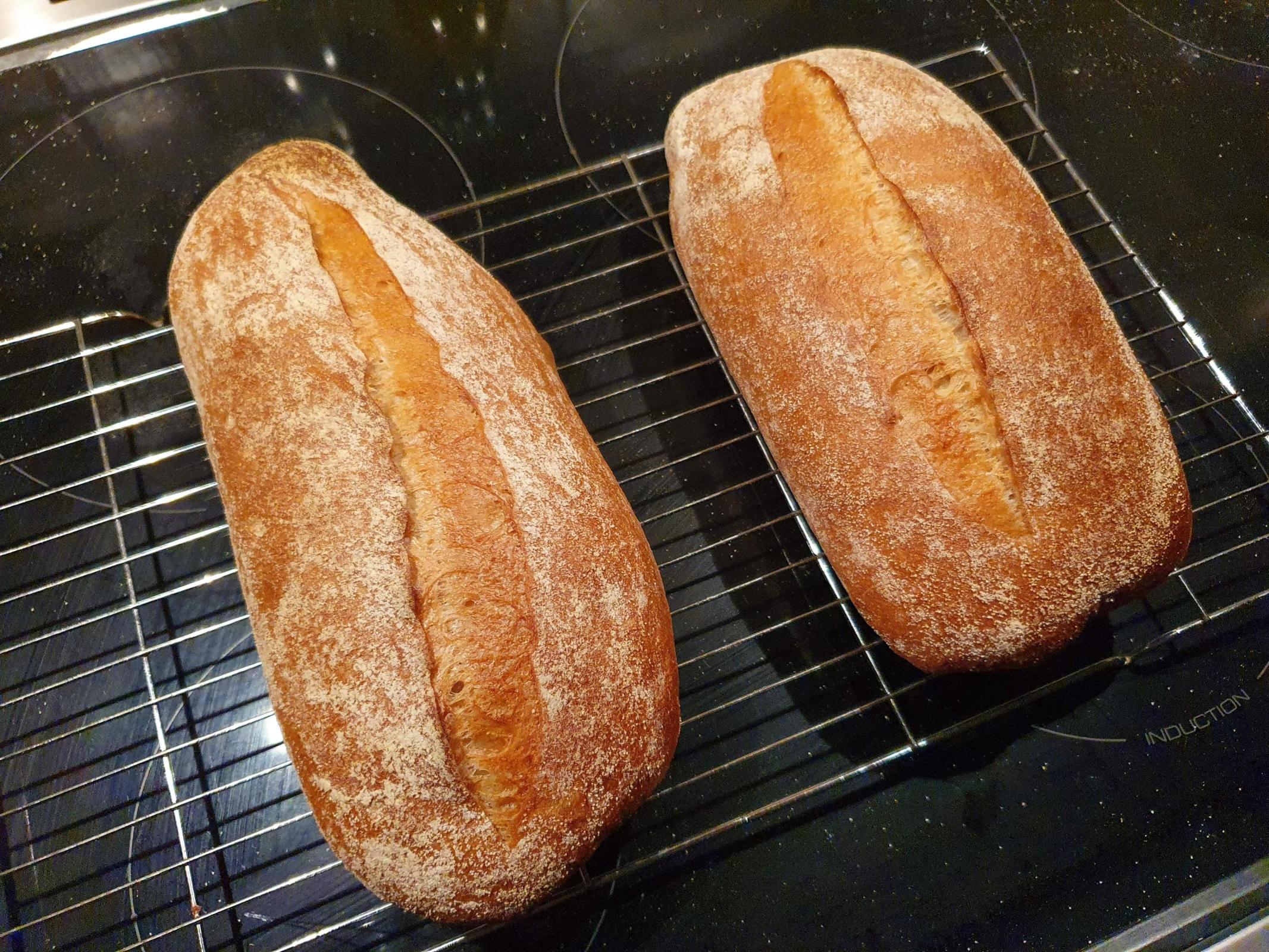 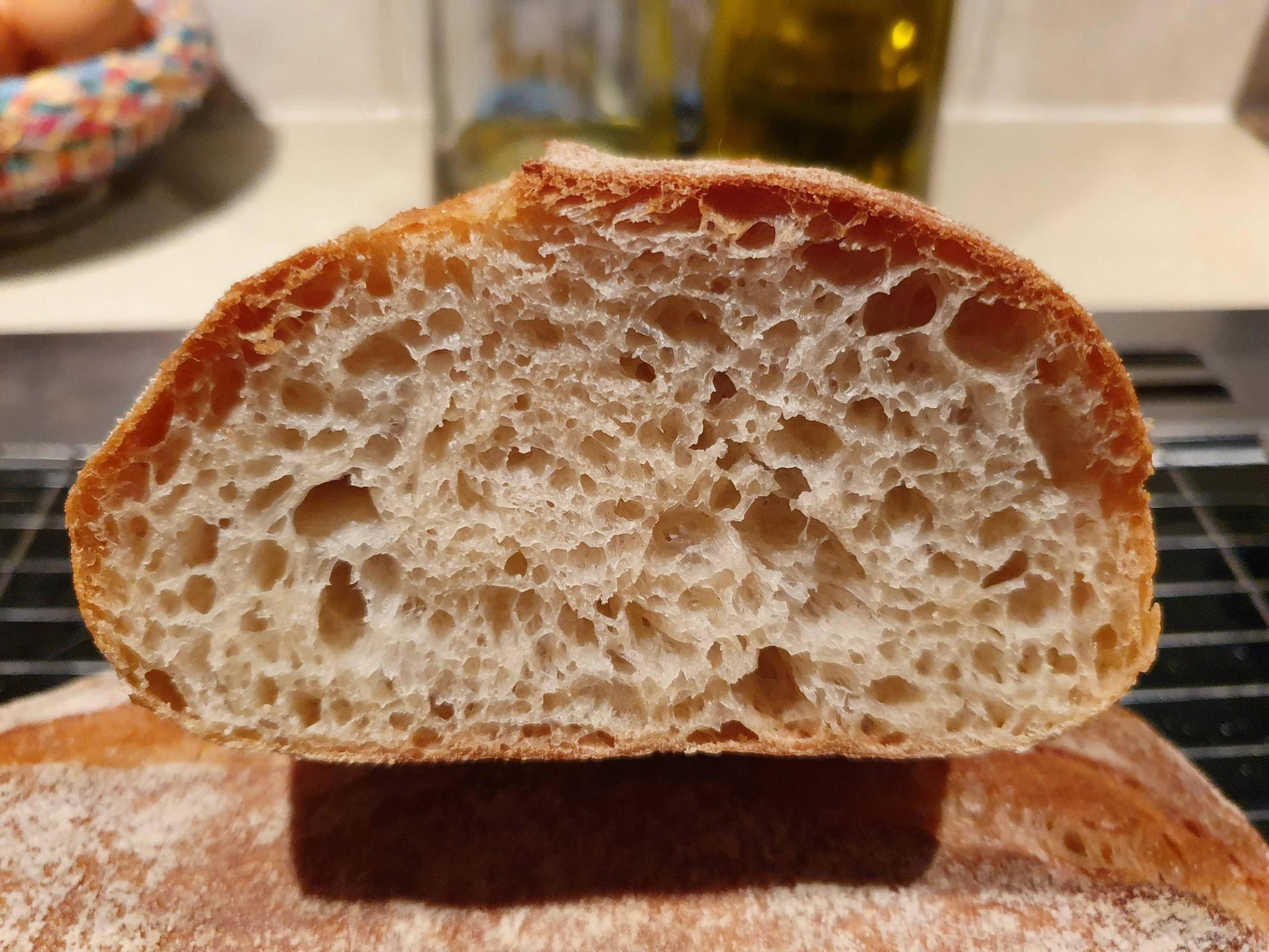 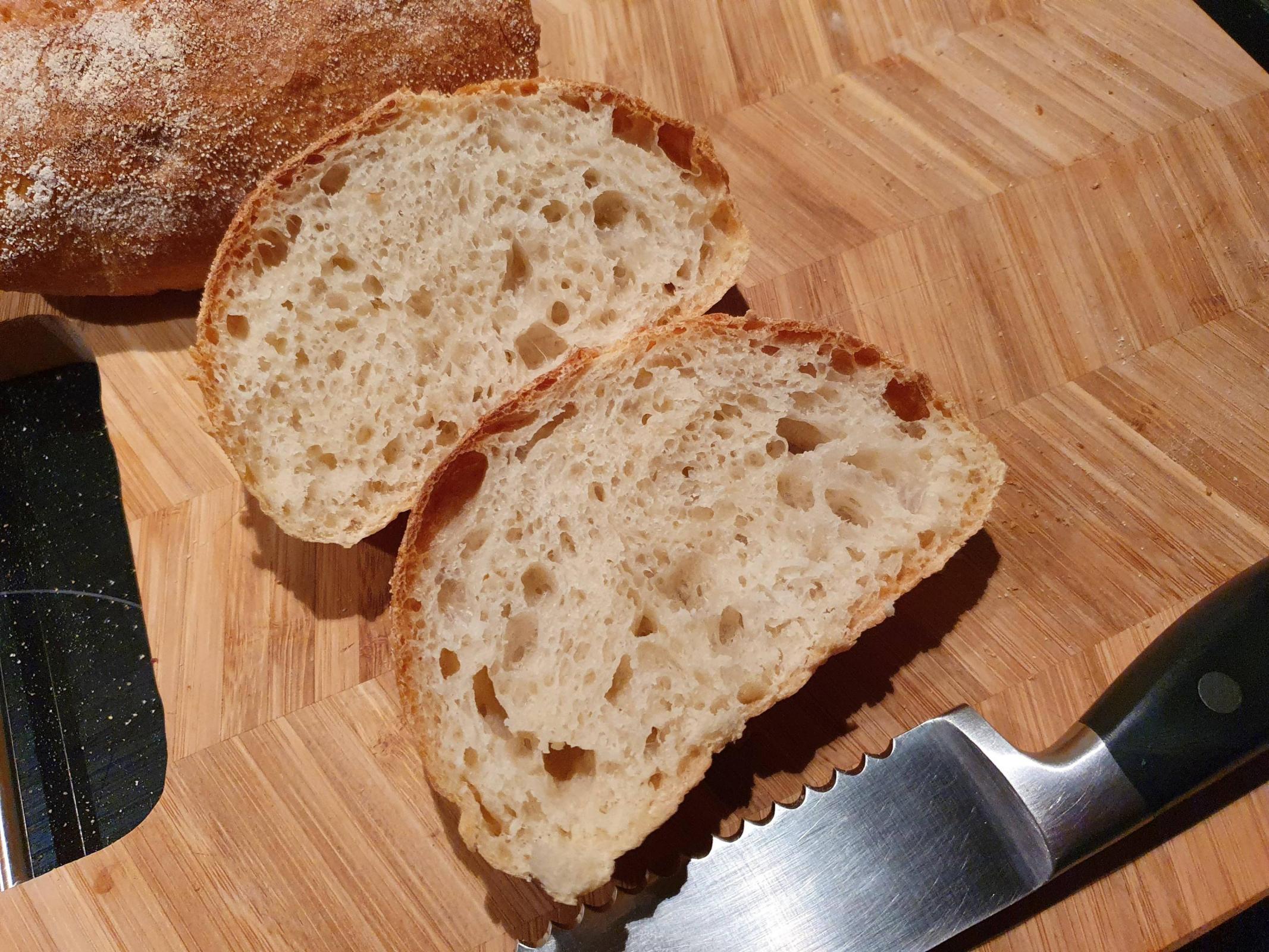 I felt more confident now, because I no longer feared a slightly softened crust as much, nor was I too worried about getting the proof and oven spring exactly right – I knew I could get great results even if the loaves weren’t super pretty.

I returned to the poolish recipe, but kept the hydration at 70%.

I only mixed to incorporate the ingredients into a shaggy mass, and just used stretch and folds (roughly 3x in the first hour or so) to develop the dough. Followed by a letter fold a little later on.

When dividing and preshaping, the dough felt very nice – clearly active and airy and light, while still feeling strong, extensible, and not too gassy or over risen.

It proofed for a couple of hours at around 21-22c, by which time it was light and expanded and delicate, without being too fragile or weak.

My baking method, honed from the previous attempts, was as follows (note these loaves weigh about 390g each):

Next time, I think I need to extend the slashes right to the ends to avoid bulging towards the centre.

The crust and colour on these loaves was pretty much perfect. A good balance of crisp and chewy, complementing a moist, chewy crumb with lots of subtle flavour. They were quite popular.

Very happy with these, and now I feel confident I can recreate them without too much trouble on a consistent basis. 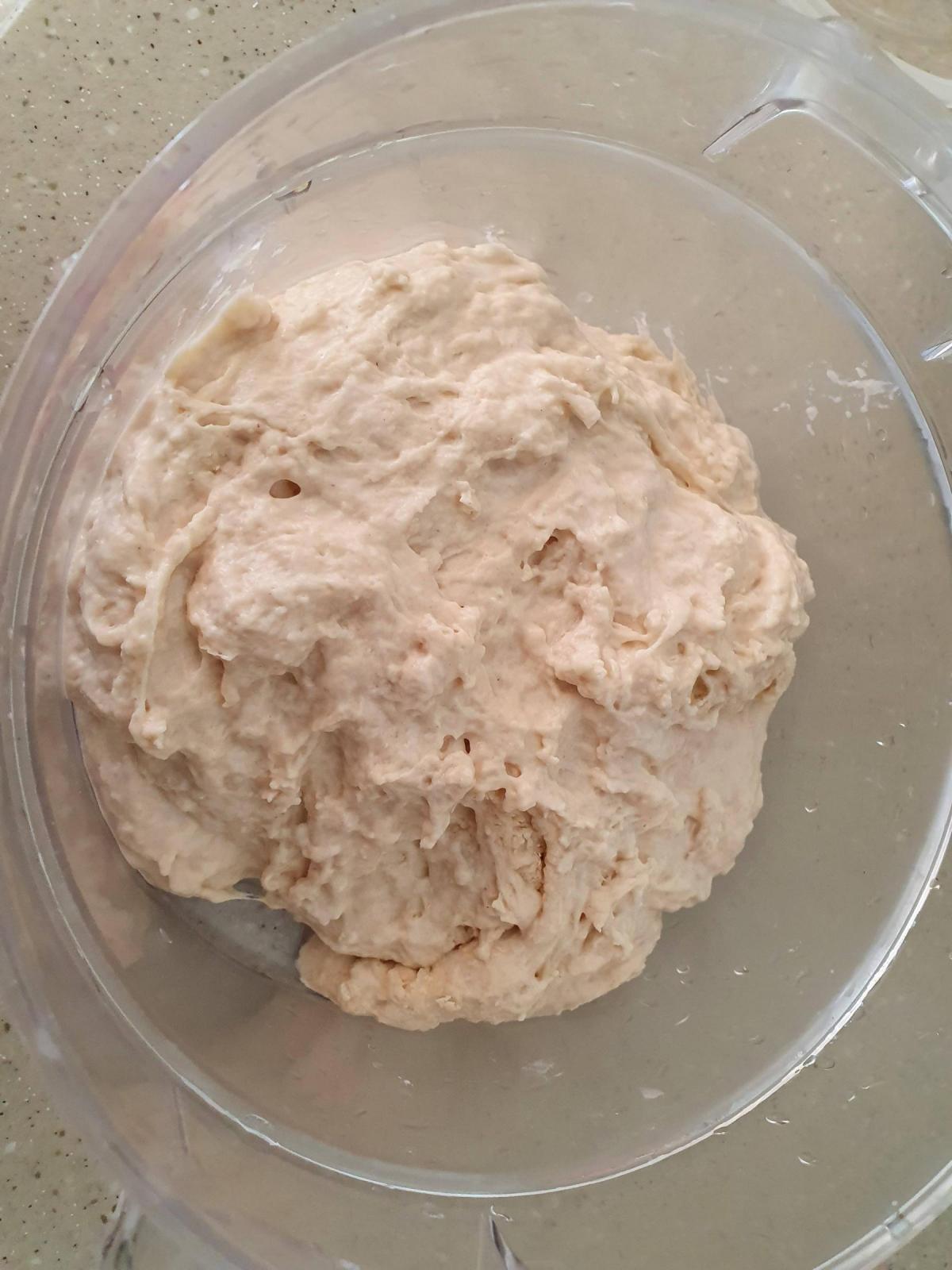 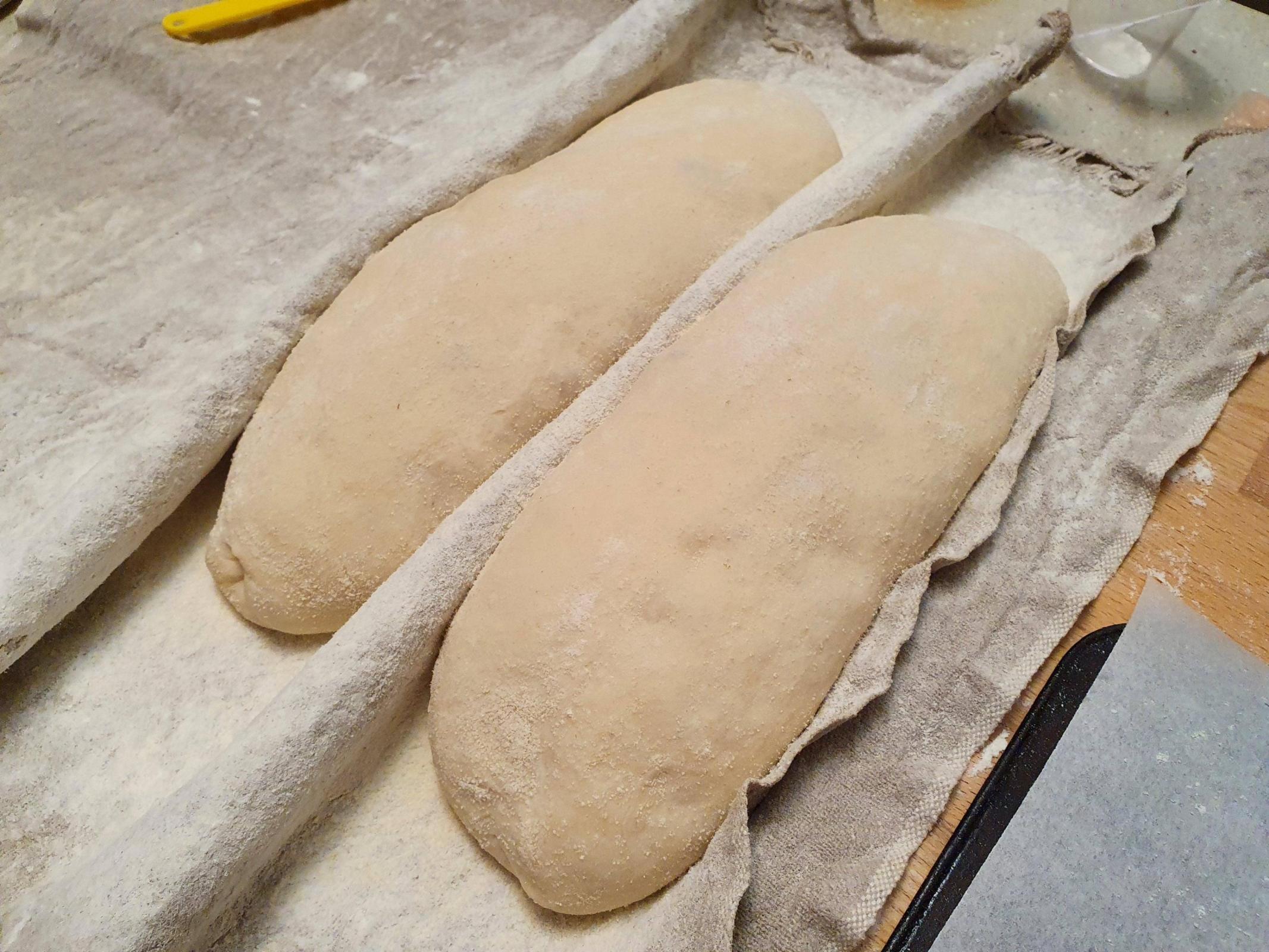 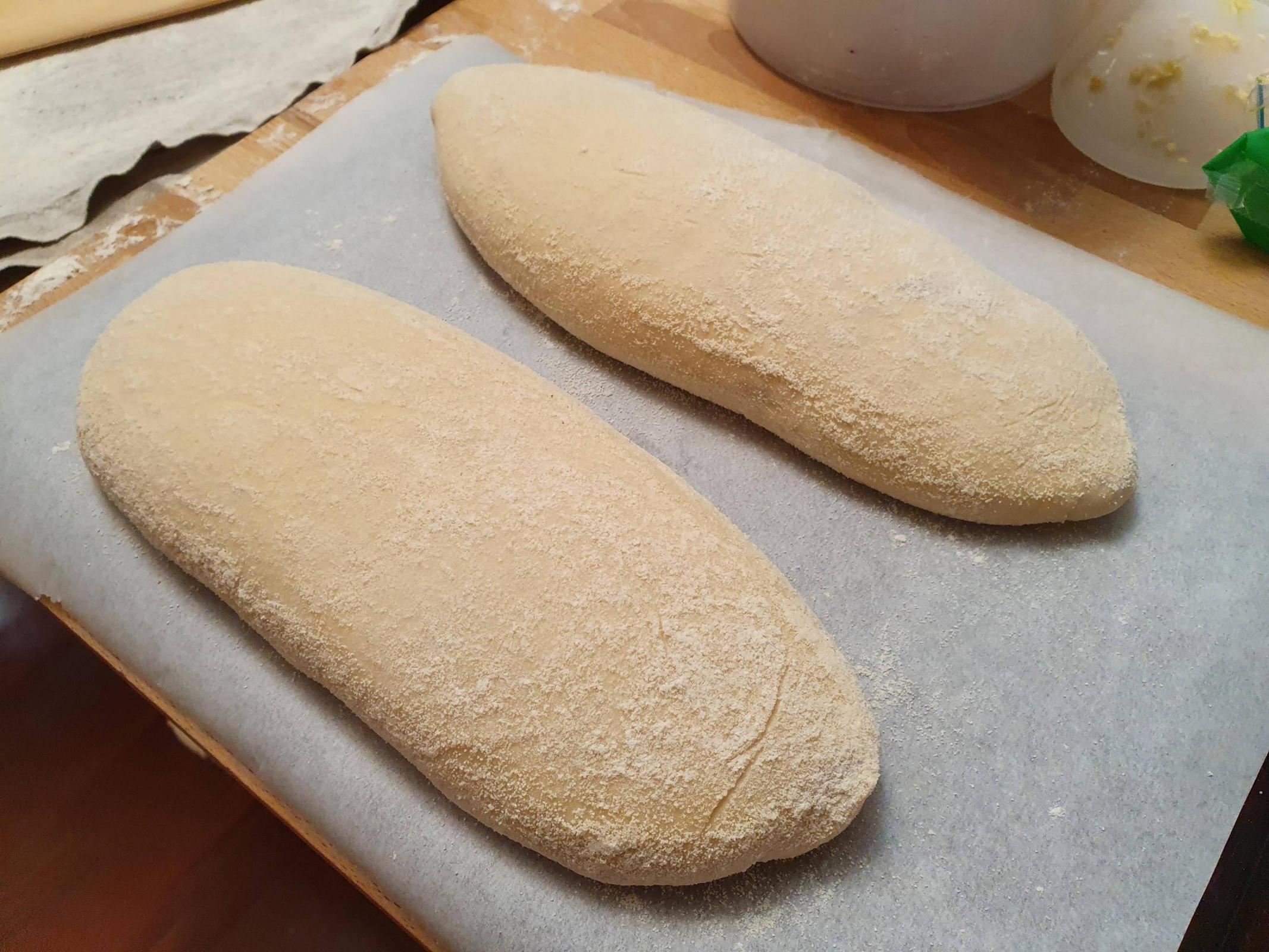 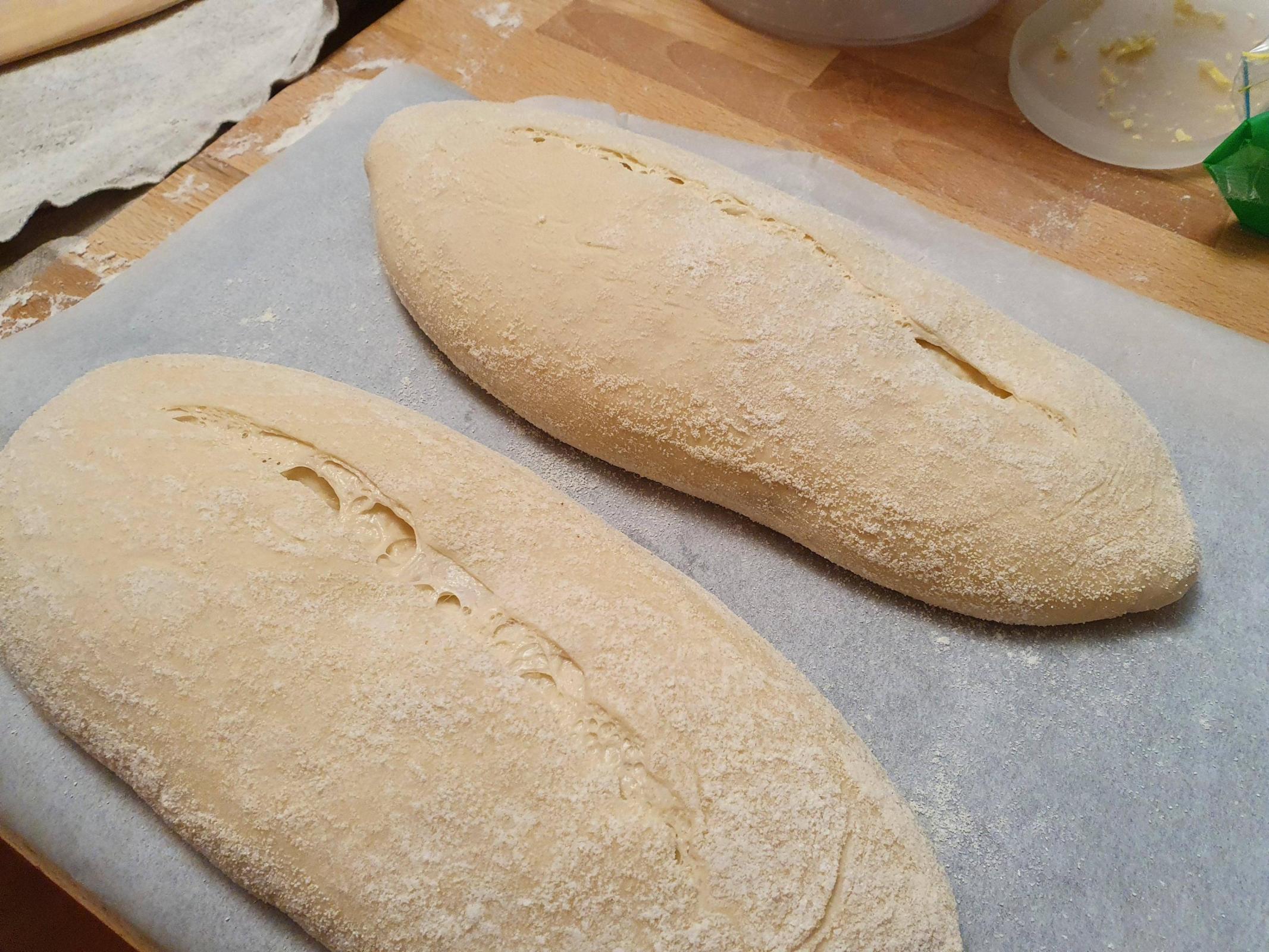 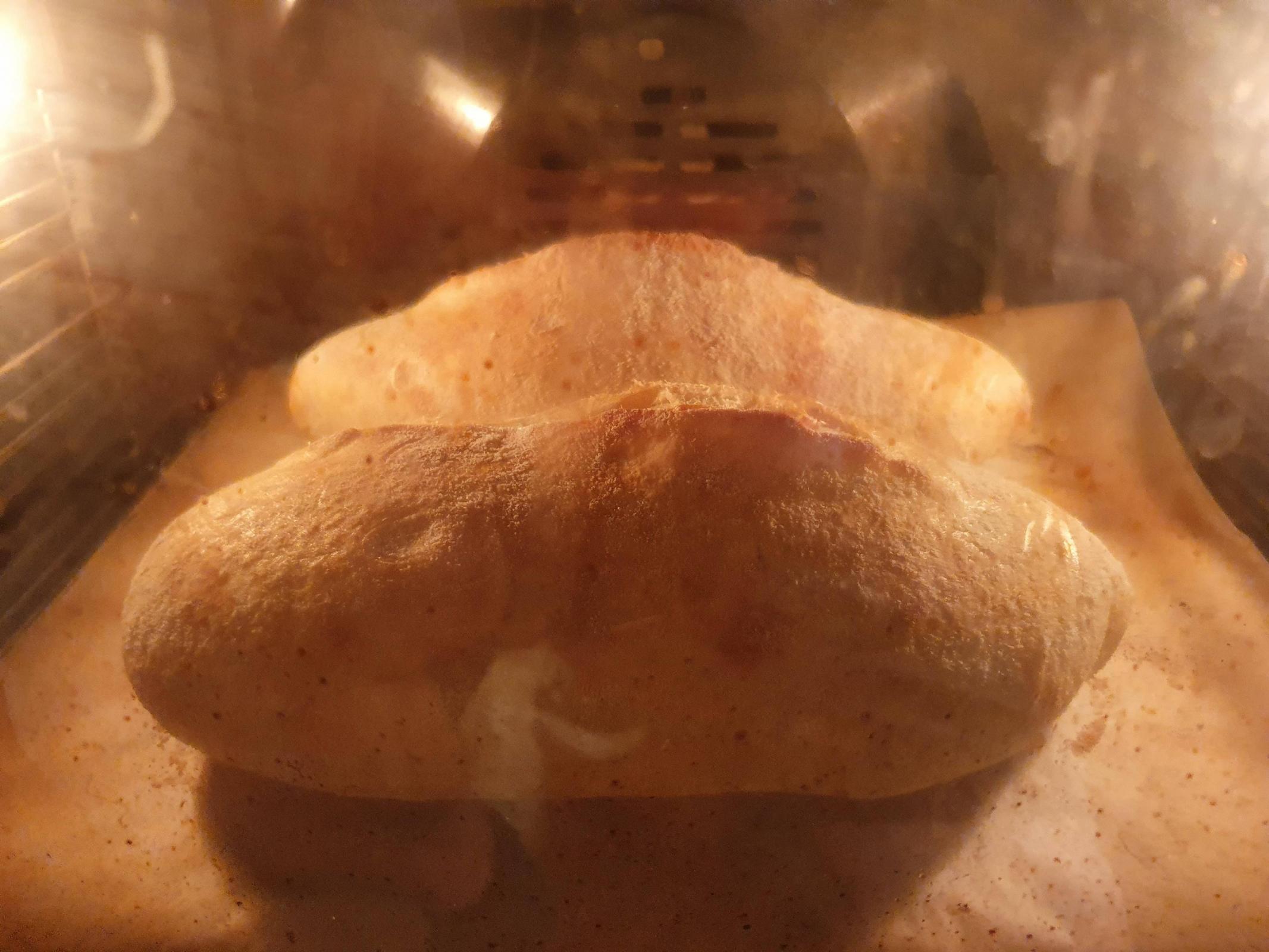 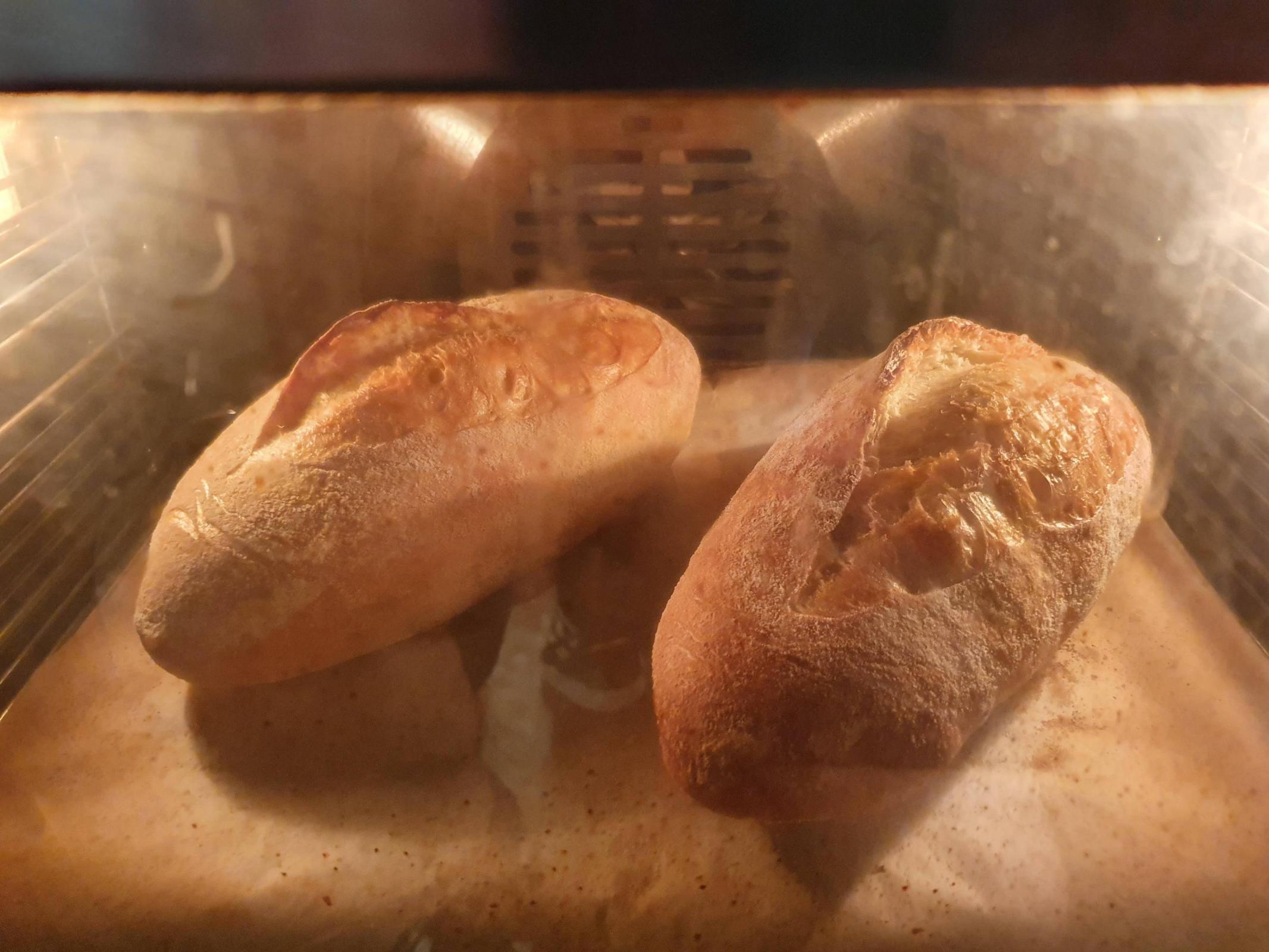 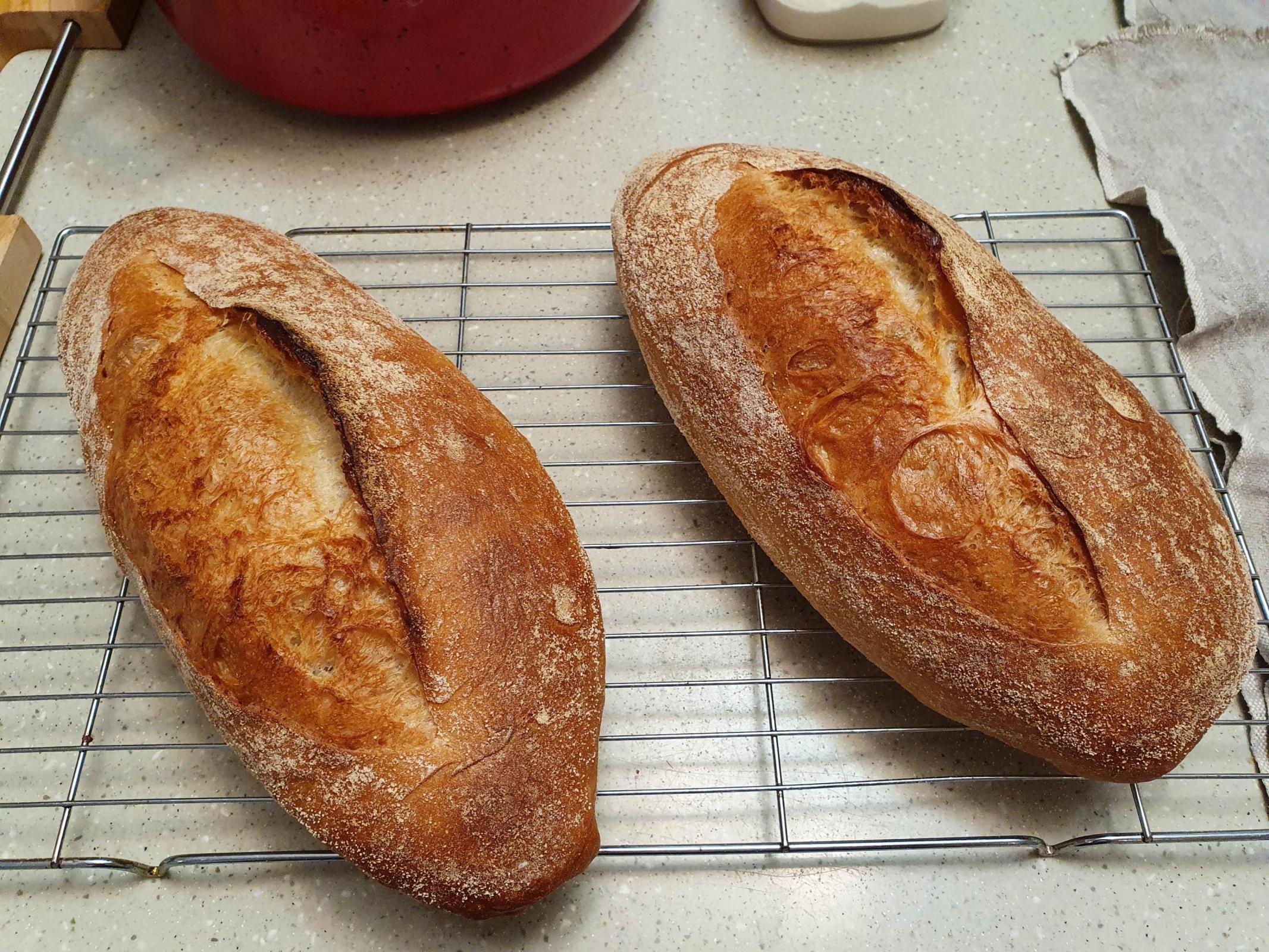 Here’s a video of the crust crackling:

And how dough felt before baking: (I promise I was being more gentle than it looks!)