My husband isn’t a big sourdough fan, so I will occasionally fiddle around with ways to minimize the acidity in our bread. Recently, I was thumbing through the second edition of Hamelman’s Bread and was intrigued by his introduction to the formula for Swiss Farm Bread, in which he notes a lack of acidity. I decided to give it a try.

The bread is started with yeast produced from a raisin soak, which was to be a new experience for me. When I ran into trouble, I consulted TFL and found a community bake dedicated to this very bread. Without going into the details all over again (my experience making YW is posted in the Swiss Farm Bread Yeast Water CB), suffice it to say that with a little help from the TFL brain trust, I was eventually successful in starting a yeast water made with apples. By that time, unfortunately, my schedule would not permit a bake for at least a week and I did not want to wait that long. I had Tuesday mostly free, but my free time would be punctuated by interruptions. And with two levain builds, the first of which could reportedly run long, I knew Tuesday probably didn’t have enough hours to give this bread its due. Still, if the dough progressed roughly according to the timelines outlined in the book, I thought I might be able to make it kinda, sorta work. And besides all that, I had an itch to make this bread and was determined to scratch it.

As it played out, the dough did not conform to the time estimates in the book, but that is probably because my day didn’t work out as planned. I ended up stopping Build 2 a little short (it tripled in volume, but I didn’t feel it had peaked), but due to a schedule change, I felt compelled to hope 200% growth would be sufficient. It wasn’t, and the bulk progressed very slowly. I ended up calling the bulk after 5 hours when the dough had risen maybe 30% percent and still looked and felt rather dense. Then I had to leave the house for a few hours, so I refrigerated the shaped loaf. When I returned, there was some slight drying around the edges so I dabbed a bit of water on the dry spots to remoisten them. This of course caused the dough to stick like glue when I tried to turn it out of the banneton. (I know, I know…)

So. Not exactly a text book bake, but I pretty much always screw up something. And I knew this one wouldn’t be textbook before I even started. But I satisfied my urge to try a yeast water bread and now have some idea of what to expect when I can bake this interesting bread with time on my side. I have a not perfect but certainly enjoyable bread to show for my efforts. And next time, I’ll know to add the fruit. 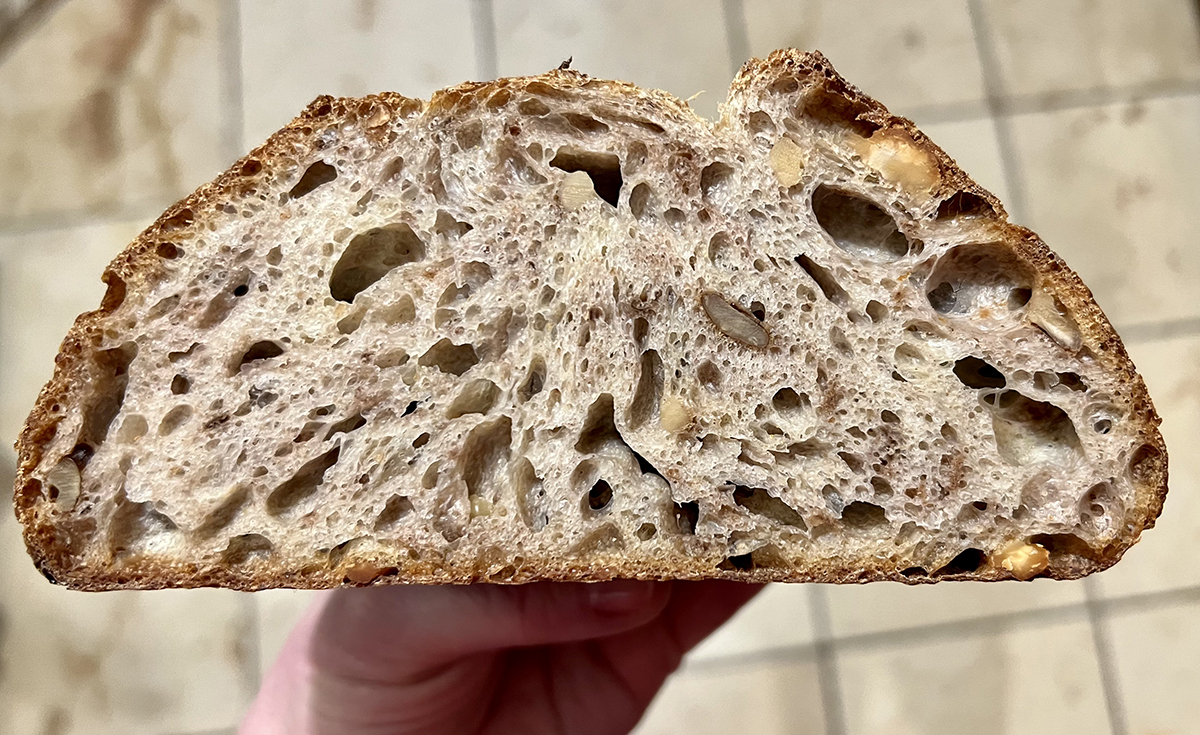