Reading through the Tartine book my curiosity was peaked by some of the various flavor combinations. The idea of sourdough with roasted walnuts, green olives, some herbs…and lemon made me curious in the best of ways. Thankfully it is just a standard sourdough but with inclusions. A LOT of inclusions. 62% of inclusions. So many inclusions that I was a bit concerned when it was being mixed, proofed, and shaped that it might be more inclusion than bread!

Ready for the second stretch and fold and the inclusions. As expected the dough smells great and I am really looking forward to this one. 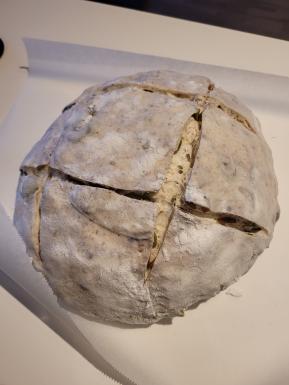 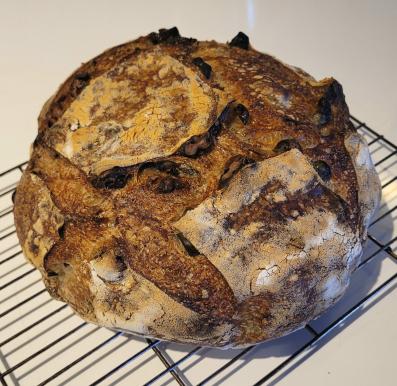 Overnight in the fridge and this bread was haunting me. I may have had a dream about baking this bread. I may have woke up early and laid in bed thinking about how the bake would go. The bake went well and then there was the torture of having to wait to cut into it. Thankfully it had about 6-8 hours to cool before I caved and carved into it to go with dinner. 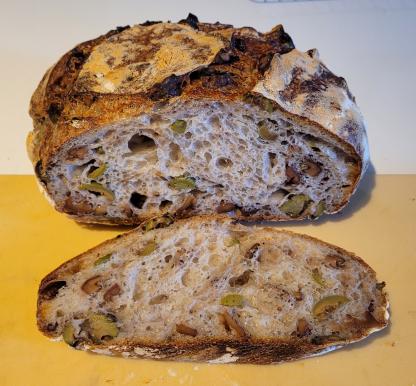 Spoiler: it was worth the wait!

Tasting Notes: The sourdough itself has a nice chew and crisp crust just like I like it. The lemon smell is there and the taste is subtle. It brings a nice freshness or brightness to the bread. It’s not a strong lemon flavor but a nice accent that I was pleasantly surprised by. I’ve now had 3 slices of this bread, as is and toasted with some butter. It’s super solid and great with cheese. I think the olives could have been stronger (the ones I had were not as salty/briny as I would expect). I would like to do this again with some black olives, a different brand of green olives, or even some kalamata olives. The toasted walnuts are wonderful. I really want to use more walnuts in bread in general after this experience. Maybe a walnut / cranberry bread soon.

Time/Effort: Three day process starting with a levain build on the morning and evening of day one, mixing and bulk on day 2, and finally baking on day 3. This is my normal sourdough schedule so It’s not out of the ordinary for me. The mixing of inclusions was a bit of a challenge but if you handle the dough gently it isn’t that much of a challenge.

Would I make it again: Yes! I want to do some different olives but this combination is great. Olives great. Walnuts great. Lemon Great. What’s not to love?