This is the best vegan pumpkin pie recipe you will ever find – it’s quick and simple to make at home, with no crazy ingredients whatsoever.

No eggs or dairy

This classic pumpkin pie recipe is everything you could ever want in a pumpkin pie – with a filling so smooth and creamy, guests will swear it must be full of fat and heavy cream!

If you’re tasked with making dessert for Thanksgiving this year, be sure to bookmark the recipe, as it gets rave reviews from both vegans and non-vegans every time it’s served.

And because it tastes just like traditional pumpkin pie, no one can ever believe it’s vegan!

Note: If you’d prefer a vegan pumpkin cheesecake, simply use my recipe for Vegan Cheesecake (or this low carb and sugar free Keto Cheesecake), replacing the yogurt with pumpkin puree and adding pumpkin pie spice and cinnamon.

For the milk of choice, feel free to use your favorite – I love the smooth and creamy texture of the pie made with coconut milk, but almond milk, soymilk, oat milk, or other nondairy milks can also be used.

All of the ingredients can usually be found at Whole Foods or in regular grocery stores.

If you want to use an egg substitute instead of the flax eggs to bind the filling, I’ve had success subbing 1 tbsp ener-g egg replacer (made of potato starch and tapioca flour) for the 2 tbsp ground flax.

Feel free to use your favorite store-bought crust, homemade pie crust, or the following recipe.

If you want a crustless version, I’ve also included a link below to a pumpkin pie with no crust.

Pie Crust Recipe: Combine 1 1/2 cups whole wheat pastry or all purpose flour, 1 tsp salt, 1/3 cup sugar or xylitol, and 1/2 cup canola or vegetable oil. Stir to form a dough, slowly adding a few tbsp of water if needed just until it sticks together but is not gummy. Press into a 9-inch baking pan.

The crust is also great with this Vegan Chocolate Pie

Above, watch the video of how to make vegan pumpkin pie 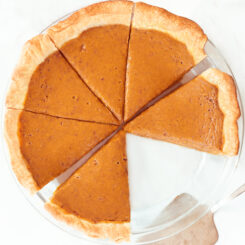 For a crustless version, try this Crustless Pumpkin Pie.