How to make the best vegan snickerdoodle cookies, a holiday classic cookie recipe that both vegans and non-vegans will love.

You’d never guess these are vegan!

The recipe uses the same basic ingredients as non-vegan cookies, meaning these soft and chewy snickerdoodles taste exactly like the traditional version everyone loves.

No flax eggs, no specialty flours, and just one bowl to clean!

If you’ve missed snickerdoodle cookies since going vegan, definitely give these buttery snickerdoodles a try.

Or if you’re not a vegan, it’s still always useful to keep an easy and egg free cookie recipe on hand, for those times where you run out of eggs and don’t want to make a special trip to the grocery store.

You know a recipe is good when all of your non-vegan friends eat so many, there’s barely any left for you!

If you want to do a pumpkin-flavored version of the vegan snickerdoodles, simply replace about a fourth of the cinnamon in the coating with pumpkin pie spice instead.

Above, watch the video of how to make vegan snickerdoodles 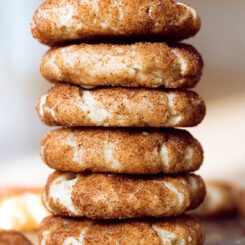 For a flourless and low carb version, try these Keto Cookies.