I haven’t had tons of success with spelt in any great quantity, but didn’t want to give up on this ancient grain.  It seems to taste good when paired with Kamut aka khorasan also an ancient grain.  Gluten is made up of gliadin and glutenin.  Gliadin is the substance that gives the stretchy feel to dough, and glutenin provides the elasticity and the structure to ensure that it holds its shape.  While wheat has a balance of gliadin to glutenin , spelt has a higher ratio of gliadin to glutenin. This makes the gluten in it much more fragile, which means it breaks down more easily.  To try to combat this I’ve added vital wheat gluten to try to help improve the quality of the gluten in this bread.

I once again sifted the bran out in order to develop the gluten in the sifted flours separately.  However, this didn’t go exactly as planned.  I decided to sift both the whole spelt and whole Kamut, but I didn’t take into account the larger particle size of Kamut.  As a result quite a bit of the Kamut ended up being sifted out with the bran.  I went ahead and scalded the bran/Kamut with 200% by weight of boiling water.  Unlike the fluffy bran that usually results from this scald, the bran/Kamut scald was much heavier so definitely had Kamut flour in it in addition to the flours.

As a result of such a great portion of the water going into the scald, there was much less water to hydrate the levain and sifted flours, the hydration would have been far to low.  So instead of the planned 80% hydration I gradually added water when mixing the levain and flours and the resultant hydration of this bread went up to 92%, which was much much higher than I thought would work for a spelt loaf.

Dough mix in AM

Add scalded bran/kamut through a series of stretch and folds in the bowl and then kneaded on the counter to fully incorporate.  Rest 30 mins.  pH 5.5

Shaping was done when the pH reached a delta of 1.0 or pH 4.5.  Placed in a banneton and allowed bench proofing until pH reached 4.22 then placed in freezer until oven heated to 500ºF for baking.

This is where I made another error, I was distracted and forgot to drop the temperature during the bake so rather than my usual 450ºF then 420-425ºF the temperature stayed at 500ºF for the whole of the bake.  When I realized this there was 5-10 mins left of baking but I noticed how dark the crust was and pulled the rather dark loaf out of the oven.  I wonder if the oven spring could have been better if I had baked at a lower temperature?

In any event, decent oven spring with very little spread, so I’m not too mad about this bake. 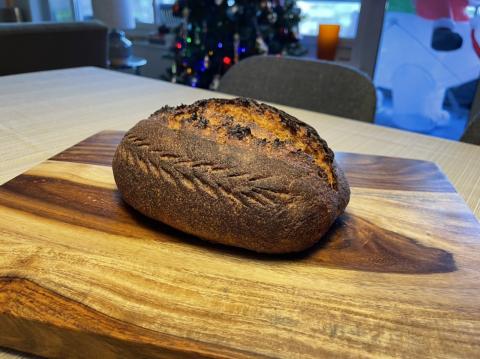 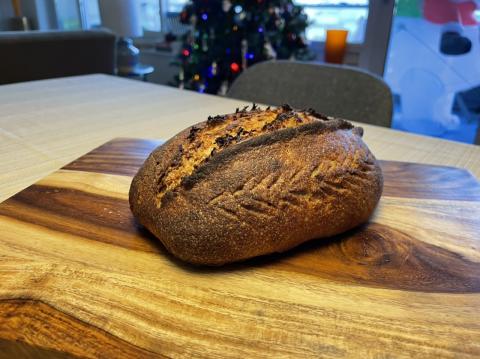 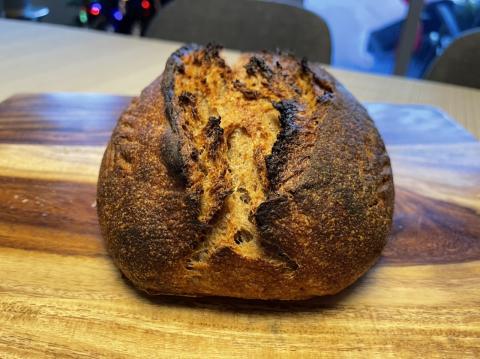 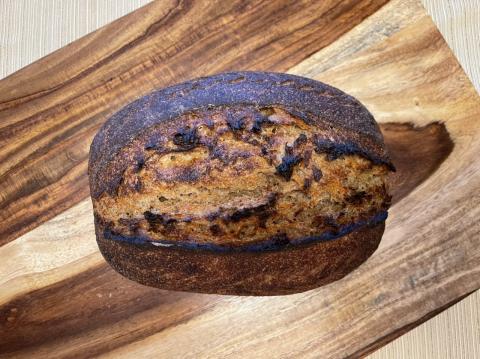